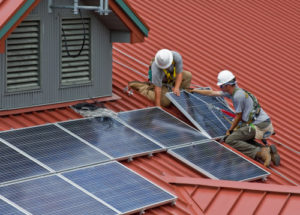 Customer referrals are becoming such an important factor in rooftop solar sales in the United States that SolarCity, the country’s biggest solar installer, is referring to the effect as a contagion.

“Residential solar power is contagious,” Vox reported earlier this month. “Studies have found that if you install solar photovoltaic panels on your roof, that increases the odds that your neighbors will install their own panels.”

From Greeley and Fort Collins, Colorado to Honolulu, Hawaii, SolarCity has produced animated GIFs that show customer referrals clustering around sites where panels had previously been installed. “Obviously SolarCity has a vested interest in promoting the idea of solar ‘contagion,’” Vox notes. But “independent academics have been tracking this phenomenon for years.”

A 2014 paper in the Journal of Economic Geography described the “wave-like centrifugal pattern” in solar installations in Connecticut, after the state began offering solar subsidies in 2005. Earlier research found similar results in California.

The idea “makes some intuitive sense,” writes correspondent Brad Plumer. “Most people still don’t know very much about residential solar power, how the subsidies work, or whether it makes financial sense. The technology is still new. But if they see that their neighbour is putting up panels, suddenly the possibility becomes more concrete. You can talk to the neighbours, find out more, think about whether it makes sense for you.”

Plumer also suggests an element of keeping up with the Joneses, in which “green-minded households don’t want to be one-upped by their neighbours installing panels. So they go buy their own.”