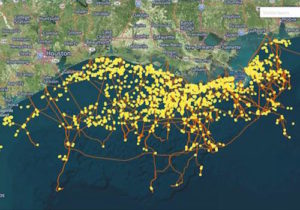 The U.S. Coast Guard and Royal Dutch Shell are taking criticism for their five-day oil recovery effort after a Shell pipeline leaked 88,000 gallons of crude into the Gulf of Mexico, about 90 miles from the Louisiana’s Timbalier Island.

While the agency and the company say there’s no more recoverable oil to be found, and claim the incident caused no environmental damage, “independent monitors from Greenpeace, Vanishing Earth, and Wings of Care question whether the size and potential impact of the spill are being downplayed,” DeSmog Blog reports.

While Shell and the Coast Guard said wildlife had been spared any impact, environmental scientist Wilma Subra said that was impossible given the size of the spill. “Of course organisms at the spill site were impacted,” Subra said. “Some fish at the site must have died and other fish and mammals will get sick from the oil.”

The incident coincided with public hearings on the Bureau of Ocean Energy Management’s plan to lease 47 million acres of the Gulf for offshore oil and gas drilling between 2017 and 2022.

Environmental watchdogs were sharply critical of the cleanup effort, with Subra concluding that fossil companies and the government are no better prepared for a spill than when BP’s Deepwater Horizon rig exploded and caught fire in 2010, killing 11 workers and triggering a 134-million-gallon oil spill that lasted three months.

SkyTruth, a non-profit remote sensing group devoted to environmental protection, education, and advocacy, charged that oil spill response vessels were grossly underperforming, and that Shell’s leak detection system had failed to spot the spill. That meant the problem had to be reported by an accidental observer, just like the early April spill at TransCanada Corporation’s Keystone pipeline in South Dakota.

“That’s right: a modern pipeline at a high-tech deepwater development project leaked thousands of gallons of oil, and that leak was accidentally discovered,” SkyTruth wrote. “Not because high-tech telemetry on the pipeline signaled an alarm due to a drop in pressure; not because flow metering detected a difference between what was going in one end of the pipe vs. what was coming out the other.”