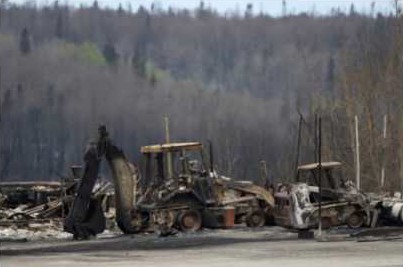 Northeastern Alberta is set to experience a seldom-mentioned but common consequence of large-scale disasters: a mini-boom from the inflow of reconstruction funds and jobs. On the down side, however: insurance will likely get more expensive.

“Businesses from ‘man camp’ suppliers to pizza parlors are preparing for a spike in demand,” Reuters reports, “as clean-up crews, builders, and oil sands workers pour into the region.” Already, bookings for temporary housing at some man camps have more than doubled. Airlines are also anticipating “increased demand as oil companies use more fly-in-fly-out workers,” while “restaurants will be very busy, as people will probably have to throw out their fridges and freezers.”

A union that supplies camp cooks and cleaners is seeing a boom. Its president Ian Robb told Reuters: “Our members are across the country, so they phone in for jobs that I post every day. The last two days, we’ve had 30, 40, 50 jobs at a time going on (our hiring board).”

In the wake of Hurricane Katrina, economic analysts in Mississippi wrote that the resulting “construction boom will spark the highest growth the state has seen in years. There will be more persons employed over the coming years than there would have been if Hurricane Katrina had not occurred.”

But the cash injected to rebuild will largely come from insurers, and one CBC report predicts higher insurance rates as a result. Analyst Don Pittis notes that the wildfires’ total estimated cost of C$5 to C$9 billion—the most expensive natural disaster in Canadian history—will force up rates at least within the region, and likely for anyone living anywhere in a dry forest.

The cost may also prompt insurers to connect the dots from climate change to property losses with more urgency. “For hundreds of years, the insurance industry has been the master of statistics,” Pittis notes. And while other industries cast doubt on the reality of climate change, insurers have been tracking the resulting increase in damage claims for more than three decades.

“Twenty years before the Rio Earth Summit, where the world’s countries first focused on a global strategy to fight climate change,” Pittis writes, “the insurance industry had recognized that claims were rising more quickly than their risk tables had told them they should. Their research pointed straight at climate change.

“As the insurance industry learns more about how to adapt, those new strategies will be passed on to homeowners, who will be encouraged to do things like make their homes more fireproof. Even if not all homeowners play along, encouraging safe practices cuts statistical risk and benefits the bottom line of insurers as well as homeowners.”