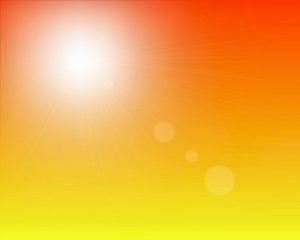 A record string of record temperatures, and disturbing new readings of atmospheric carbon dioxide, suggest the Earth’s climate has passed through a critical point of no return, scientists say.

Global temperatures continued to rise in April, marking the seventh consecutive month of record heat, during which the world has been more than 1ºC hotter than the average for each of those months between 1951 and 1980.

More troubling: each of the last three months has also broken the previous record by record margins. For April, the Guardian reports, “the new record broke the previous one, which was set in 2010, by 0.24C. That record itself broke one set three years earlier.”

Meanwhile, air samples taken at observatories in Mauna Loa, Hawaii and Cape Grim, Australia indicate the climate is “going into very new territory,” James Butler, director of global monitoring for the US National Oceanic and Atmospheric Administration (NOAA), told the paper. Although readings of above 400 parts per million (ppm) CO2 have been recorded at Mauna Loa since 2013, for the first time scientists fear that concentrations may not fall back below the symbolically significant benchmark.

Australia’s Cape Grim observatory, which has less seasonal variation in CO2 concentrations, reported a reading of 399.9 ppm on May 6, feeding the expectation that “within weeks” concentrations would go over 400 ppm and not retreat.

Knowledgeable observers greeted the news with resignation. “Climate scientists have been warning about this since at least the 1980s,” said Andy Pitman, director of climate science at the University of New South Wales in Australia. “And it’s been bloody obvious since the 2000s. So where’s the surprise?”

Pitman said the sudden surge in planetary surface temperatures, and the known delay between escalating atmospheric carbon levels and global heat retention, raise doubts about whether the goals set at last December’s Paris climate summit can still be realized.

The summit’s aspirational target to cap warming at 1.5ºC above pre-industrial levels is “wishful thinking,” he said. “I don’t know if you’d get 1.5°C if you stopped emissions today. There’s inertia in the system. It’s putting intense pressure on 2°C.”

Meanwhile, the hot northern hemisphere winter and spring are expected to all but ensure than 2016 sets a record for year-long temperature—after 2015 did the same.