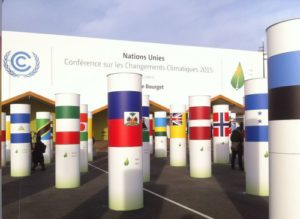 The Paris agreement set a goal of keeping global average temperatures “well below” 2ºC above their pre-industrial levels, with a target of limiting that to 1.5º. But the deal left much of the detail of monitoring and accurately reporting nations’ progress toward the required global emission reductions for later. The first round of that work began Monday, and is scheduled to run until May 26.

And the negotiators’ agenda may expand. “We have no other option but to accelerate” emission reductions, warned Christiana Figueres, the outgoing UN climate secretary. “Certainly we are not yet on the path” to December’s goals for capping temperature rise, she added, noting that Intended Nationally-Determined Contributions (INDCs) announced to date would still allow catastrophic warming of 2.5º to 3ºC.

Estimates of what even lesser warming might cost the world’s poorest were brought into focus by a report from the United Nations Environmental Programme (UNEP). The study put the annual price tag of adapting to sea level rise, more intense heat waves and droughts, disrupted growing seasons, floods, and stronger storms at US$280 to $500 billion. The estimate, based on more detailed national and sectoral data, was five times higher than the last one attempted, by the World Bank, in 2010.

It prompted the 48-member group of least developed countries to urge climate negotiators to seek deeper carbon cuts before 2020, while providing more aid to help them adapt to what is in store.

“The Earth’s oceans are rising, disease is spreading, our land is no longer producing the food we need to survive,” said the group’s spokesperson, Democratic Republic of Congo envoy Tosi Mpanu Mpanu. “And that is without considering that developing countries need support to the tune of $4 trillion to meet these [current INDC] pledges.”