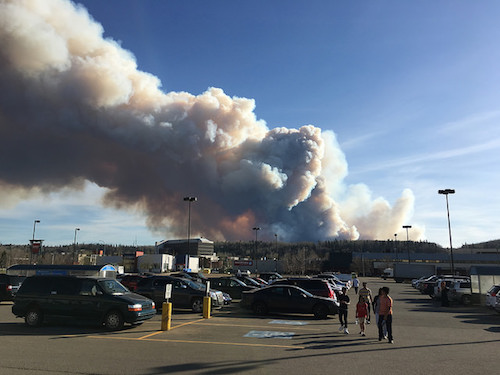 After largely escaping the first assault by a massive wildfire that emptied Fort McMurray of its entire population of 88,000 people last week, major tar sands/oil sands producers in the region began emptying work sites and shutting down additional facilities yesterday as the wind turned, threatening areas north of the Alberta city.

The provincial government ordered mandatory evacuation of at least 19 work camps between Fort McMurray and Fort McKay, including the main operations and processing facilities belonging to Suncor Energy Inc. and Syncrude Canada Ltd. A 665-room camp was destroyed overnight Monday, and two others were threatened, the National Observer reported. Elsewhere, company firefighters worked to keep flames from approaching within a kilometre of a tank farm belonging to pipeline company Enbridge Inc.

The fire that leapt across the Athabasca River a week ago, and has destroyed as many as one-fifth of the structures in Fort McMurray, remains out of control, now spanning an area of around 285,000 hectares—4½ times the size of Metro Toronto—on all sides of the evacuated city. The Observer reported yesterday that two explosions in Fort McMurray “damaged 10 homes, and poor air quality forced staff working to clean the hospital and natural gas utility workers to leave.” Grist, meanwhile, placed the city’s air pollution at 38 on a scale of one to 10.

“The air quality scale measures contaminants, smoke, ozone, and nitrogen dioxide, none of which is good to be breathing in,” explained correspondent Xian Chiang-Waren. With the influence of warmer weather and less favourable wind conditions, “the poor air quality could be a problem for days, affecting when residents can return.”