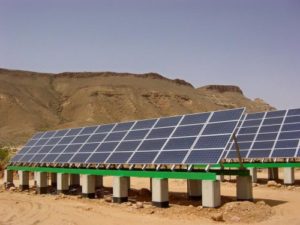 A US$100,000 project in the town of Auja, West Bank is the region’s first major solar effort to be co-funded by Muslim and Jewish financiers in the United States, with a technical team that consists of Israeli Jews and Palestinian Muslims.

The first phase of the project went online last month and supplies about one-third of the electricity required to run a subterranean pump, providing water to 45 local farm families. “In addition to its environmental benefits, the solar project gives an economic push to farmers who struggle with unreliable and expensive electricity,” the New York Times reports.

But before the project could be built, organizers had to navigate the political complexities of working in a community that is surrounded by Israeli settlements to the north, south, and west.

“In a place of nationalist, religious, and political animosity, Palestinian farmers embraced the project on one condition,” write reporters James Glanz and Rami Nazzal, citing project co-founder Ben Jablonski. The community “insisted only that the collection of donors and engineers be free of any connection to the Israeli settlements scattered across the West Bank on land Palestinians consider their own.”

To participate in the project, Jablonski resigned from the board of the Jewish National Fund, over what the Times describes as the Fund’s “modest but politically fraught involvement in West Bank settlements.”

Peter Beinart of City University of New York pointed to Jablonski’s Build Israel Palestine project as a sign “that younger American Jews are less comfortable with Israeli control of the West Bank than traditional philanthropic groups and their members have been,” the paper reports.

“It’s one thing for American Jewish organizations to talk vaguely about economic development for Palestinians,” he said. “To be willing to take a stand in opposing settlements as part of it, as Ben has done—that makes it unusual.”