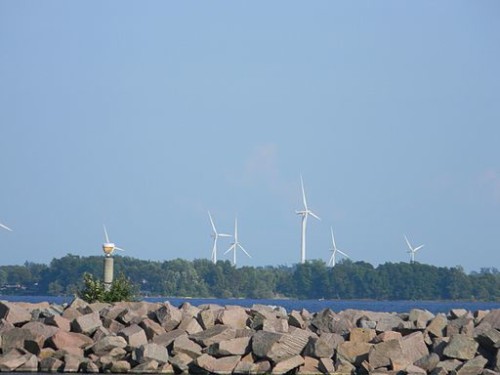 The province’s “temporary” ban on offshore wind, now five years old, is also the subject of a $500-million lawsuit from Ontario-based Trillium Power Wind Corporation. At the time, Ontario said it was cancelling a collection of incoming project proposals, “ostensibly so it could commission more scientific research into how to build them properly,” the Ottawa Citizen reports.

“Like Trillium Power, Windstream wanted to build a large array of windmills in Lake Ontario off Kingston,” writes reporter David Reevely. “Like Trillium, Windstream alleges it was wronged by that 2011 decision, which scrapped every project then in development and froze applications for new ones.” But “unlike Trillium, Windstream has an enormous amount of evidence, hundreds of pages’ worth, in the public record, filed with a tribunal in The Hague.”

The new documents, obtained by Windstream under access to information, show provincial officials considering an offshore “exclusion zone” for the projects, hoping to pacify wind opponents who objected to the turbines’ “aesthetics”, without setting up similar objections to onshore wind farms.

“The Ontario government settled on scientific uncertainty despite the repeated assertions…from staff at (the provincial Ministry of Natural Resources) that they were confident that existing regulatory mechanisms were sufficient to deal with site-specific problems as they arose,” Windstream states in its court filing. “It had not been suggested at the time that there was any uncertainty that would prevent that work from going forward.”