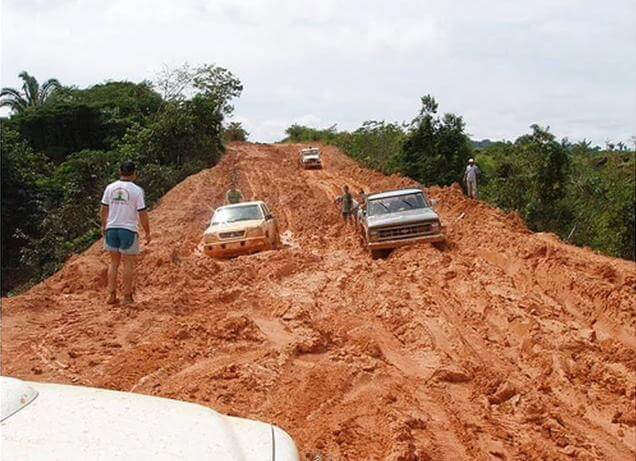 Damaging new roads and other projects are likely to be nodded through.

Amidst the turmoil of the presidential impeachment process, members of Brazil’s Congress are set to dismantle environmental protection laws.

SÃO PAULO, 12 May, 2016 – Taking advantage of Brazil’s present political turbulence, as the battle to impeach President Dilma Rousseff reaches its climax, reactionary politicians are quietly rolling back environmental and indigenous protection laws in defiance of the country’s commitments under the Paris Agreement.

Environmentalists say that if the bill known as PEC 65/2012, now at the Senate committee stage, is approved, it means that major infrastructure projects will be able to go ahead regardless of their impacts on biodiversity, indigenous areas, traditional communities and conservation areas.

Instead of a careful if somewhat slow licensing process which involves scientific assessments including biological, botanical, anthropological and archaeological studies, developers will merely have to present a proposed study of environmental impact to be allowed to begin – without actually having to carry out the study. And once a project is under way it cannot be cancelled or suspended by the environmental protection agencies.

Environment organisations, both governmental and non-governmental, have protested strongly at the bill’s implications. For Marilene Ramos, the president of the official agency for the environment and renewable resources, IBAMA, (in Portuguese only) it means Brazil is going in the opposite direction to developed countries and will no longer be able to control infrastructure  projects.

“It is completely absurd; it is as though the act of applying for a driving licence entitled you to drive a lorry”

Indigenous leader Nara Baré, of COIAB – the Coordination of Indian organisations in the Brazilian Amazon – said: “Brazil presented targets in Paris but doesn’t do its homework, protecting the forest and us who live in it.”

Carlos Bocuhy, the president of PROAM, an environmental NGO, says the effect of the bill will be to end environmental licensing: “It is completely absurd; it is as though the act of applying for a driving licence entitled you to  drive a lorry.”

The Climate Observatory (in Portuguese only) sees the bill as “a bad joke”,  even more so in a country that has just suffered the worst environmental disaster in its history, the bursting of a dam of toxic mud in Minas Gerais state on 5 November last year. The calamity destroyed all animal and plant life and a major river nearby, and could be the world’s worst disaster after Chernobyl.

Greenpeace director Marcio Astrini said of the bill that “if it becomes law, it will act as a factory of tragedies”

Its author, Senator Acir Gurgacz, has a personal interest: his family owns a transport company which would benefit hugely from the paving of the 900 km BR319 highway, linking two Amazon capitals, Porto Velho and Manaus. At present the project cannot go ahead because IBAMA has embargoed the work, alleging environmental damage. The road runs through conservation areas, indigenous lands and areas of largely unspoiled rainforest.

The bill´s rapporteur is Senator Blairo Maggi, a soya magnate, who has cleared thousands of hectares of rainforest in his home state of Mato Grosso, and is tipped to be the minister of agriculture in the new government that will take over once President Rousseff is suspended from office this week.

Environmentalists are already expressing deep concern about the government planned by vice-president Michel Temer, who will become Brazil’s president on 12 May if the impeachment goes through.They note that his policy paper, A bridge to the future, which laid out his plans for government, made no mention of the environment, climate change or the Amazon rainforest.

Instead the big farmers’ and ranchers’ lobby, FPA, or Parliamentary Farming Front, presented the president-to-be with a “positive agenda” – a list of demands which included the abolition of the ministry of land reform, the halting and revision of the demarcations of indigenous reserves and quilombos (territories inhabited by the descendants of runaway slaves), and more funds for agribusiness, which already enjoys substantial subsidies.

Besides the bill to end environmental licensing, other damaging bills are in the pipeline.

One, known as PEC 215, has been doing the rounds in Congress for over 15 years, but with the imminent arrival of the new, pro-farmer government it is expected soon to be voted into law. If it is, it will mean that the power to decide further demarcations of indigenous areas – nearly 400 are under consideration – will pass from the executive to the Congress.

With both houses dominated by members of the rural lobby, this is regarded as tantamount to ending demarcations.  Another 1,611 quilombo areas will also be affected. The importance of the indigenous and quilombo territories is that they tend to conserve forested areas, instead of clearing them for mechanised agriculture or cattle grazing.

By law certain areas contained within each rural property (which, especially in the Amazon, are often vast) must be left wild. But another measure on the table (bill 4508/16) will allow them to be used for cattle grazing.

Others will permit mining and hydroelectric dams in indigenous areas without any need for permission from their inhabitants. Reducing controls on pesticides – Brazil is the world’s biggest consumer – is yet another target.

The government of Dilma Rousseff has in no way been a model of protection for the environment and indigenous areas, but it seems that the government of Michel Temer could be much worse. – Climate News Network