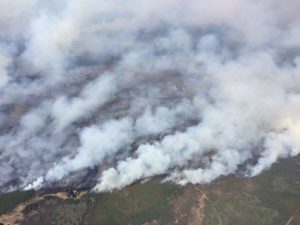 As exhausted firefighters were finally able to report they had turned the flames away from devastated Fort McMurray, the debate over the implications of Canada’s worst-yet climate change-related disaster heated up.

“[D]ecision-makers have been in denial or slow to move in addressing the fact that climate change is the new dragon in the forest,” The Tyee wrote. Boreal forest fires now account for the loss of more trees than deforestation in the tropics—and Canada ranks second in the world for fire loss. (Russia is first.)

Provincial governments now begin preparing for fire season a month earlier than they used to, responding to shorter winters and earlier snow melt. Hotter temperatures dry out forest land sooner, and raise the prevalence of lightning storms, which can ignite dozens of fires within a few hours. One storm in Alaska last year “unleashed 50,000 lightning strikes in just five days.”

“We’re exceeding thresholds all the time,” UBC forest scientist Mike Flannigan told The Tyee. “Many of us saw a Fort McMurray-like situation coming back [in 2009] and even earlier, but frankly none of us expected anything as horrific as what has happened there this week.

He added that “this is a signal, one of many, that the fire situation is going to get a lot worse, and that in some cases, there will not be much we can do about it.”

And the threat will continue to rise. For every Celsius degree of average temperature rise, correspondent Ed Struzik writes, forests require 15% more precipitation to maintain a somewhat fire-resistant moisture content. But Flannigan notes that climate models offer little hope that precipitation will keep up with the 3ºC in warming conservatively expected in Canada’s north during this century. Rather, some areas may get less rain and snow.

Moreover, infestations by insects like the mountain pine and spruce bark beetle, which leave trees weakened or dead, are more common after milder winters, providing fuel waiting for a spark.

Meanwhile, observes Struzik’s Tyee colleague Crawford Killian, “one recent report by Oil Change International estimates that between tax credits, tax deductions and royalty relief, our national and provincial subsidies [to fossil fuel companies] amount to $2.93 billion every year. The International Monetary Fund, however, says the subsidies are much greater…some $34 billion a year.”

A year ago, the IMF pegged global fossil subsidies at more than $10 million per minute, and renowned climate economist Lord Nicholas Stern said the estimate was almost certainly low.

“Without those subsidies, oil and gas would be far more expensive to consumers—and sustainable energy much more competitive,” Killian writes. “Meanwhile, we have good reason to expect [that] still more scorching summers will again stress the boreal forests to the ignition point.