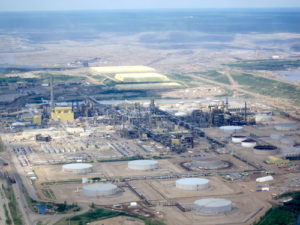 With several tar sands/oil sands operations and pipelines shut down as a result of the Fort McMurray wildfires, an analyst predicted Friday that Canadian bitumen production could fall by about 1.4 million barrels per day, or more than half.

That’s the amount of production located in close proximity to the fire, said Samir Kayande of ITG Investment Research. “Without pipes running, it seems reasonable that a large proportion of that or all of it is subject to being shut in over the next few days.”

CBC lists seven shuttered tar sands/oil sands operations, including 600,000 barrels per day belonging to Suncor Energy and another 255,000 bbl/d run by Shell. “Considering the unpredictability of the wildfire, it’s not clear how long companies will have to curtail production,” the network reports, but a long shutdown could be particularly tough for companies that use an extraction technique known as steam-assisted gravity drainage (SAGD) that depends on keeping the underground bitumen heated.

“If the wind shifts and the fire burns itself out, and assets are not endangered, then you can get up and running relatively quickly,” Kayande said. “For the SAGD operations, the sooner the better. You don’t want to lose the heat that’s been put in the reservoirs,” for fear of jeopardizing long-term production.

On Friday, the Financial Post reported there had been no significant damage to tar sands/oil sands facilities located close to the fires, though Alberta’s senior wildfire manager, Chad Morrison, said the flames were “at the gates” of Nexen’s Long Lake project. While Maclean’s explored whether bitumen itself could catch fire, the BBC picked up specific concerns about Long Lake. “We’re looking at a blast area of about 14 kilometres if that plant were to go,” RCMP Sgt. Jack Poitras told reporter James Cook.