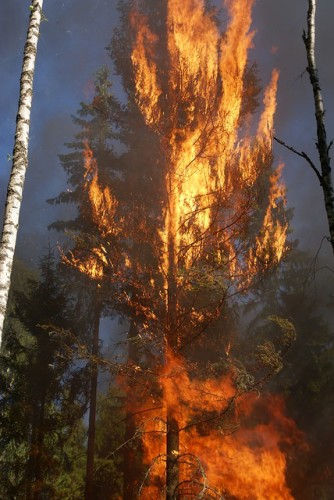 The Fort McMurray wildfires have set off a secondary firestorm of discussion and second-guessing about whether now is the time to talk about the role of climate change in creating the conditions for the costliest disaster in Canadian history.

In traditional media and on social networks, there was near-unanimous agreement that it’s never the right moment to blame people for the disasters that befall them. (Editor’s note: If I see one more post about “karmic circles”, the resulting scream will turn the circle into a hexagon.) But it’s never too soon to make sense of a dire emergency, identify its root causes, and understand how a change in behaviour can prevent or mitigate future disasters.

Some would say we owe the 88,000 Fort McMurray evacuees nothing less.

On Friday, the executive directors of 10 Canadian environmental organizations issued a joint statement urging support for the evacuees and donations to the Red Cross.

“This is not the time for blame,” stressed the chief executives of the David Suzuki Foundation, Ecojustice, Ecology Ottawa, Environmental Defence, Équiterre, Greenpeace Canada, Leadnow, Sierra Club of Canada, Stand, and West Coast Environmental Law. “The fire in Fort McMurray is a tragedy that no person or community should have to endure,” and “we are asking everyone to take the time to donate to the Red Cross and show the people of Fort McMurray and surrounding First Nations communities that Canada has their back.”

On Slate, U.S. meteorologist and climate hawk Eric Holthaus argues that “tragedies like the Fort McMurray fire make it more important, not less” to talk about climate impacts. Holtaus lists the “messy mix of factors” that “all aligned to turn the fire into this continuously unfolding tragedy.” But climate change was the one that “spawned a commentary firestorm of its own” in the course of the week.

“Many people have expressed outrage at the fact that climate change is being mentioned as a contributing cause to this fire,” Holthaus writes. “It is ‘insensitive’ to the victims to bring up something so political at a time like this, they argue.”

The reality, he says, is that it’s “absolutely necessary” to talk about climate change during an ongoing disaster. “There is a sensitive way to do it, one that acknowledges what the victims are going through and does not blame them for these difficulties. But adding scientific context helps inform our response and helps us figure out how something so horrific could have happened.”

Like any other tragedy, this one has elements that are “contested and political,” Holthaus adds. Even so, “discussing the likely causes and contributing factors of a disaster in real time help us cope, but more than that, it helps us figure out the best way of preventing future disasters.”