Alberta Welcomes Cooler Weather, But Fires Could Burn for Months 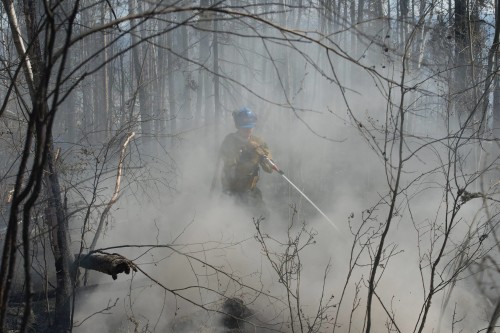 First responders fighting the Fort McMurray wildfires reported a ray of hope Sunday, as a change of weather brought spatters of rain, higher humidity, and some hope of cooler conditions.

The conflagration known as “the beast” had grown to 1,610 square kilometres (621 square miles) and was still out of control, but its expansion had slowed. The fire had been expected to cross into Saskatchewan Sunday, but stopped 30 to 40 kilometres short, sending smoke but not flames across the border and triggering air quality warnings in several communities.

“For us this is great firefighting weather,” said Alberta’s senior wildfire manager, Chad Morrison. “We can really get in there and get a death grip on this fire.”

But despite the moment of respite, Alberta Agriculture wildfire information officer Matthew Anderson warned Saturday that the fires could burn for months.

“There are a lot of hotspots and the entire area that is affected, the size is double the size of Calgary, will have to be checked by crews,” he told CBC. “We would need a significant amount of precipitation to really help to bring things under control a bit more.”

Late Sunday, the local Member of Parliament said most of Fort McMurray is still intact, but it may be years before the city is running normally again. “An estimate: 20% of the homes have been burnt, but the majority of homes are standing, no damage at all,” David Yurdiga told the BBC. “So you know what? It’s a lot better than I thought it was.”