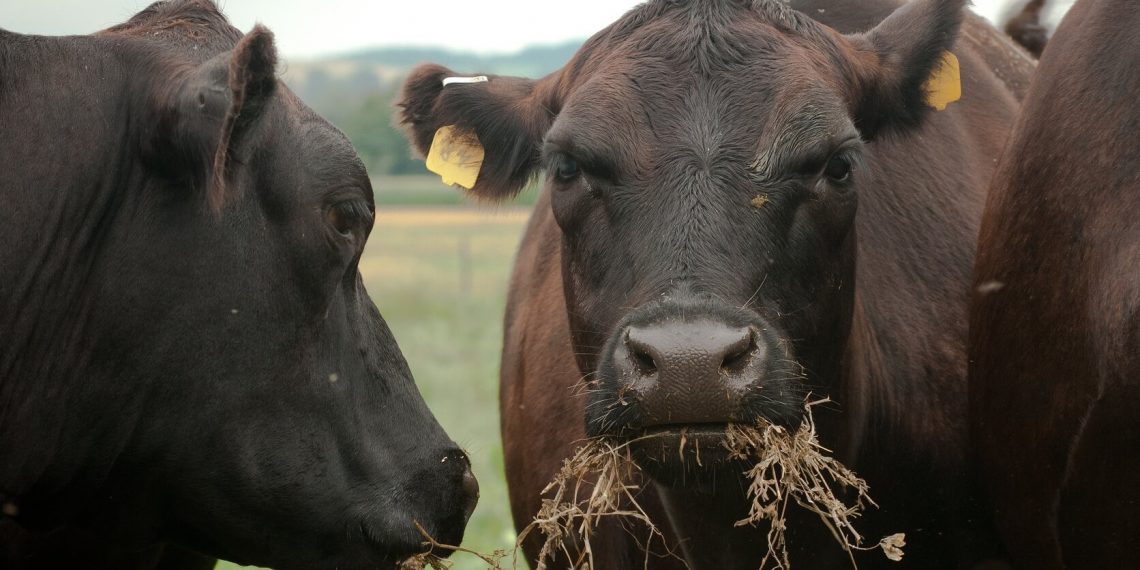 An estimated 12% of the gross energy cows get from feed is lost in gusts of methane gas.

Scientists have found a way to increase the energy cows take in from feed, while reducing the vast amounts of the greenhouse gas methane they pump out of the other end.

LONDON, 8 May, 2016 – It is a tiny molecule with a mouthful of a name, 3-nitrooxypropanol, but European scientists say it could make all the difference. It could convert a cow or a sheep from a monstrous methane-producing machine into something a little more environmentally friendly.

In doing so, it could increase the energy that a ruminant could employ in making milk or meat.

And, according to a new research report in the Proceedings of the National Academy of Sciences, the molecule, informally known as 3-NOP, could contribute a tiny change in animal diet that might mean a new way of reducing greenhouse gas emissions.

Cattle, sheep, goats and other ruminants − animals with several stomachs that bring up swallowed food to go on chewing it − farmed by humans produce an estimated 100 million tons annually of the greenhouse gas, methane.

Methane is as a global warmer around 30 times more potent than carbon dioxide over a 100-year timespan, so even though it is released in much smaller quantities, it is an important part of the climate machine.

Bacteria generate it in the ruminants’ stomachs as they quietly process a daily diet of high-cellulose and high-fibre plant food, and the flatulent animals then eructate (or belch) huge quantities aloft, to fuel further global warming. Ruminant methane is the second biggest source of the greenhouse gas, after rice farming.

For years, researchers have tried to think of ways to step up agricultural output and at the same time reduce emissions. They have suggested altering human diets and taking the vegetarian option; they have suggested changing animal diets; and they have even proposed the development of low-flatulence livestock.

But while other researchers have proposed a genetic modification that could reduce methane output from the rice paddy fields, researchers from Germany, Spain, France, Switzerland and the US have taken a closer look at the mechanism that manufactures the methane in the farm animal’s rumen (its first stomach), and they have calculated that 12% of the gross energy of the animal feed is lost in great gusts of greenhouse gas.

They focused on the biochemistry of digestion and, in particular, the role of 3-NOP. And they found that it could inactivate the enzyme that energises the methane-forming step in the microbial activity in the ruminant’s digestive system.

More importantly, it didn’t do anything else. It did no harm to those important microbes in the animal’s digestive system that do not normally produce methane.

It will take a lot more research to track all the steps in the complex process of animal digestion, just to make sure the process is safe and effective, but the authors suggest that right now it looks as though it could provide a very helpful food supplement.

“Up until now, no one has described the mode of action of a compound that can repeatedly reduce, by 30%, methane production in animals without any risks, either to the animal’s health or to their productivity,” says David Yáñez-Ruiz, project co-ordinator at the Spanish National Research Council’s Zaidin experimental research centre in Granada.

“We will see an increase in the efficiency of ruminant production systems as better use is made of the energy taken in as animal feed, given that methane production accounts for a loss of 12% of the energy an animal ingests.” – Climate News Network