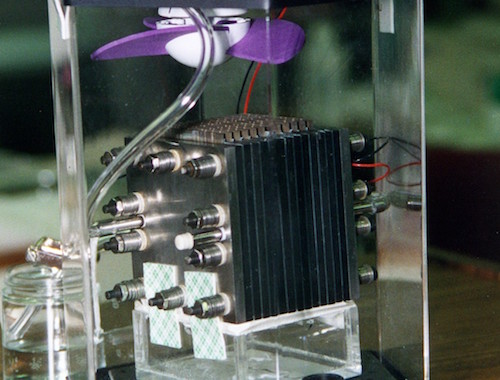 ExxonMobil is pouring research and development dollars into FuelCell Energy, a Danbury, Connecticut company that is hoping to commercialize a process to capture and produce energy from the carbon dioxide emissions from fossil-fueled power plants.

“We think it’s got the possibility to be a game-changer,” said Vijay Swarup, vice president of research and development at Exxon Mobil Research and Engineering. “We’re putting the necessary resources behind this to take the research to the next level.”

Swarup acknowledged that full-scale development of the technique would be years away.

As its name suggests, FuelCell Energy already uses fuel cells in about 50 installations around the world to produce clean electricity through a chemical reaction. The cells’ need for incoming carbon dioxide was the catalyst for a partnership with Exxon that now dates back four years.

“The result, at least so far in the laboratory, is that the fuel cells effectively isolate and compress the carbon dioxide while producing enough power to more than make up for the energy cost of capturing the carbon,” the Times reports. “ExxonMobil estimates that a 500-megawatt power plant with these fuel cells could generate 120 megawatts of additional power, compared with a loss of 50 megawatts of power using conventional carbon capture technology.”

Emily Carter, founding director of Princeton University’s Andlinger Center for Energy and the Environment, said emission reductions through carbon capture and storage (CCS) could be a bridge to non-emitting energy sources. “We’re going to be burning fossil fuels for the vast majority of our electricity for some time to come, whether we like it or not,” she told the Times. “We desperately need CCS.”

She added that “the idea of merging these two technologies to get something that’s greater than the sum of its parts is terrific.”

On Twitter, Carbon Brief Policy Editor Simon Evans questioned the economics of the plan, pointing to FuelCell Energy’s calculation that a 500-MW coal plant would require a 400-MW cell to capture 90% of its carbon emissions.

“The fuel cells add net output to the system,” he wrote, “but fuel cells are expensive. Don’t see how adding them to coal can be cheap.” A 500-MW natural gas plant would hit the same carbon capture rate with a 200-MW fuel cell, according to FuelCell Energy.