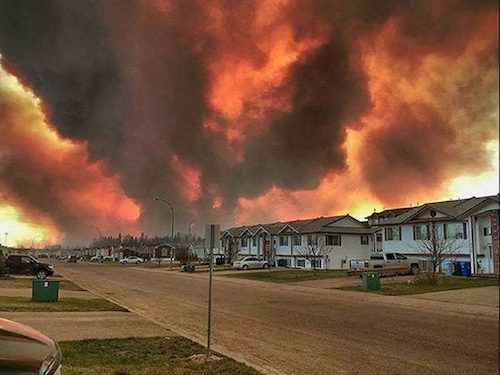 Firefighters were waiting for help from a “significant rain” to turn the tide against Fort McMurray’s raging wildfires Thursday, after 88,000 people were evacuated from the stricken city and winds of up to 70 kilometres (43.5 miles) per hour pushed the reach of the flames to 85,000 hectares, an eight-fold increase over Wednesday night.

“I expect this fire to continue to grow over the next number of days,” said senior wildfire manager Chad Morrison. “Let me be clear, air tankers are not going to stop this fire. This is an extreme fire event. It’s going to continue to push through these dry conditions until we actually get some significant rain to help us.”

As of Thursday morning, “the main fire, now south of the city, is expected to continue to burn out of control today and perhaps for many days to come,” CBC reported. “More than 100 firefighters, and 10 helicopters and 16 air tankers are fighting the wildfire, with more resources on the way.

“In addition to the firefighters battling the blaze in the boreal forest, more than 200 firefighters and 25 fire trucks are in the city itself, protecting homes and buildings. But in tinder-dry conditions and with winds constantly shifting, all of that manpower alone cannot stop the inferno.”

A Bank of Montreal analyst estimated the cost of the damage could hit C$9 billion if the entire town has to be rebuilt. “That would make the disaster far and away the costliest in Canadian history,” CBC reports.

CBC business analyst Don Pittis, who previously studied forestry and worked for a decade as a forest fire fighter, explained the dynamics behind the “firestorm effect” that has swept Fort McMurray over the last several days. “Just like a camp bonfire, the heat of the flames pushes the air into a convection column. When there is little wind, the fire burns straight up, not sideways,” he wrote.

But when winds bend the convection current forward, “the fire leaps through the needled crowns even before the fuel behind has finished burning. Then the process is repeated,” so that “a wide swath of forest burns at once, flaring up into the sky, throwing up bark, branches, even whole trees.”

At that point, “firefighters standing in front of the blaze would suffocate as the fire consumes the oxygen and replaces it with smoke. That’s why, despite economic damage, they must be pulled out. Water bombers have almost no effect.”

In an analysis by Climate Central published Wednesday by Scientific American, University of Alberta wildfire specialist Mike Flannigan said the pattern of the early season blaze “is consistent with what we expect from human-caused climate change affecting our fire regime.” News coverage has begun connecting and comparing the Fort Mac fire to other recent disasters—from Slave Lake, Alberta, to Alaska, to the Valley Fire that consumed 2,000 buildings last year in California’s Lake and Sonoma counties.

“What’s happening in Fort McMurray is a perfect encapsulation of the wicked ways that climate change is impacting wildfire season,” wrote Climate Central’s Brian Kahn. “A drier than normal winter left a paltry spring snowpack, which was quickly eaten away by warm temperatures. That left plenty of fuel on the ground for wildfires to consume.

“Add in this week’s temperatures, which soared far above normal, and you have a clear view of how climate change is affecting wildfire season, not just in Alberta, but across the northern reaches of the globe.”

“There was a mild winter and not a lot of meltwater from the mountain snow pack,” agreed Canadian Forestry Service research scientist Mike Wotton. “Now, a stale air mass has been sitting over Alberta, and it led to very low humidity. Then there was an early, hot spring, and everything got very dry. Then on top of that, it got windy.”

He added: “You hate to use the cliché, but it really was kind of a perfect storm.”

Another factor, wrote CBC’s Pittis, is that “spring fires are strange things. Despite hot conditions up on the surface, the ground and deep roots can remain frozen, meaning the trees are not yet flush with water. In spring fires even deciduous trees, normally a partial firebreak, can flare up in eerie yellow smoke.”

While the science began to weigh in on the factors contributing to the Fort McMurray wildfire, the disaster triggered the best and the worst of online commentary. While climate and clean energy organizations posted links to local disaster relief, the story also “brought out the worst on social media,” CBC’s Bruce Cheadle reports on the National Observer, “with sanctimonious eco-trolls posting incendiary, insensitive, and unhelpful barbs describing the conflagration as climate change ‘karma’ for a city that is synonymous with oilsands development.”

“I find it offensive for people to refer to what’s going on in Fort McMurray as some sort of come-uppance,” responded climate scientist and British Columbia MLA Andrew Weaver, who participated in a 2004 study that linked global warming to heightened wildfire risk. “The reality is we are all consumers of products that come from oil.”

CP cast Fort McMurray’s pain as part of a global phenomenon, noting that the average fire season has increased by 33 days in South America—and by a month in Alberta.

Wildfires now consume more than two million hectares of Canadian forest per year, the UofA’s Flannigan told Cheadle, compared to a million hectares in the early 1970s. “This is a foretaste of things to come,” he said. “Next year it could be Dryden, Bagotville, Rimouski. We live, work and play in the boreal forest. When you do, fire is part of the boreal forest environment.” (h/t to The Energy Mix subscriber Bill Henderson for pointing us to the Scientific American analysis)