‘We Will Have Climate Refugees’, U.S. Interior Secretary Warns Canada 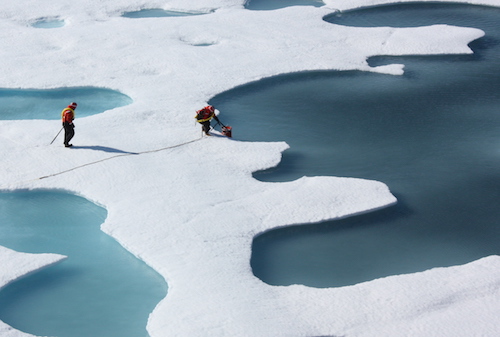 U.S. Interior Secretary Sally Jewell broached a subject featured often in apocalyptic visions of a much warmer world, warning Canada last week to be prepared for “climate refugees” from the Arctic.

Speaking to reporters after meeting with Environment and Climate Change Catherine McKenna in Ottawa, Jewell warned that climate change is already out of the box in the north, the Globe and Mail reports.

“You’re not going to be able to turn this around,” Jewell said. “We can stem the increase in temperature, we can stem some of the effects, perhaps, if we act on climate as we are committed to do through the Paris accords. But the changes are under way and they are very rapid. We will have climate refugees.”

The U.S. secretary was speaking primarily of communities, like Canada’s Tuktoyaktuk, that may be forced to move as shorelines recede in a region that is warming at twice the global average rate. “We have to figure out how to deal with potentially relocating villages, or supporting communities in their adaptation and in building resilience within those communities to a changed reality,” Jewell noted.

Other forecasters have imagined hundreds of millions of migrants, fleeing intolerably hotter and drier conditions in the hemisphere’s tropics and mid-latitudes, seeking new homes in Canada’s north.

Elsewhere, the New York Times reported the U.S. Department of Housing and Urban Development had committed US$48 million in what it called “the first allocation of federal tax dollars to move an entire community struggling with the impacts of climate change,” at Isle de Jean Charles in Louisiana.