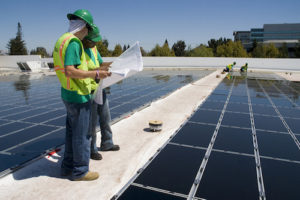 Solar is poised to become the biggest creator of energy jobs on what Fortune Magazine describes as the “world’s highest-traffic job site.”

“At this rate,” the publication declares, “solar will overtake oil for job postings by the end of the year.”

Right now, oil and gas job postings still make up about half of the new energy-related work opportunities listed on Indeed.com. But the number of advertised jobs in that sector has been falling steadily since 2014. Solar jobs, although down from 2015, are stable.

“If the current pace of postings holds, solar will become the largest market for energy jobs by the fourth quarter of 2016,” Fortune predicts.

“Whether or not solar overtakes oil on Indeed,” the site’s chief economist Tara Sinclair told the publication, “energy workers would do well to position themselves for work in renewable fields such as solar, wind, and hydroelectricity.”

At least one group of trade workers who lost their jobs in Alberta’s tar sands/oil sands as a result of the collapse of world oil prices has already anticipated Sinclair’s advice. The self-styled Iron and Earth association is asking the provincial government for assistance in retraining for solar installation.