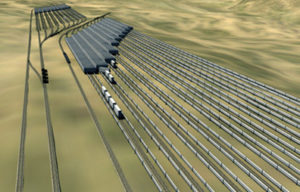 A principle as old as the weights that keep an antique grandfather clock ticking shows promise as a low-tech electricity storage system with a small footprint, its promoters say.

Energy storage investment is booming in the United States, jumping more than 240% last year as utilities and large-scale power users integrate larger quantities of intermittent solar and wind generation into their systems. Batteries, pumped hydro, and compressed air technologies are all competing for the emerging business.

The idea being rolled out in the southern California desert near Tehachapi involves rail cars loaded with big cement blocks, remote-controlled electric locomotives, and gravity. When electricity is loaded into the system, it drives the locomotives to pull the weighted cars up a hill. When the grid calls for that power back, the cars roll back down hill, pulling along the locomotive and generating electricity as its motor runs in reverse.

The private Advanced Rail Energy Storage (ARES) project recently secured a permit from the U.S. Bureau of Land Management to scale its idea up with a 5.5-mile (8.8-kilometre) track on 106 acres (43 hectares) of land in Nevada, Vox reports. The company, which is still seeking financing for the larger installation, forecasts it will have storage capacity of 12.5 megawatt-hours and output capability of 50 MW when it is completed in 2019.

Although its promoters say the concept is suitable for grid-scale time-shifting energy storage with outputs as large as 3 GW, ARES hopes to commercialize its Nevada facility first for grid services like load smoothing. The loaded train cars, according to Vox, “do not respond quite as fast as batteries (five to 10 seconds, as opposed to effectively instant).” But they are cheaper and more scalable than pumped hydro storage, employ off-the-shelf technology, and are far more adaptable to any site with a hill.

Moreover, claims ARES CEO Jim Kelly, rail storage “produces no emissions, burns no fuel, requires no water, does not use environmentally troublesome materials, and sits very lightly on the land. When you’re done and it’s time to decommission, you repurpose the railcars, you recycle the rails, you recycle the railroad ties, you rake up the gravel, you throw down grass seed. In a year, no one knows you were there.”