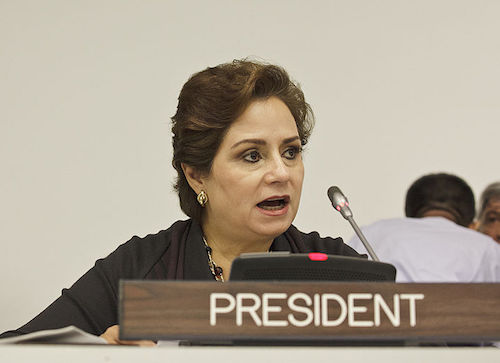 A veteran Mexican diplomat has been chosen to succeed Christiana Figueres at the head of the United Nations Framework Convention on Climate Change (UNFCCC) secretariat. Patricia Espinosa, currently Mexico’s ambassador to Germany, will take over from Figueres in July, the UN agency said in a release.

Figueres led the UNFCCC through the difficult walk-up to and triumphant conclusion of the Paris climate summit last December, where 195 countries agreed on the urgency of reducing humanity’s carbon emissions to keep global temperatures “well below” 2ºC above pre-industrial levels.

It now falls to Espinosa to see that the Paris accord’s commitments are met, including proposed reviews as early as next year of how effectively the world’s nations are keeping their emission reduction promises.

Mexico’s foreign minister under the administration of its previous president, Felipe Calderón, Espinosa chaired the 2010 COP 16 climate conference in Cancún, and is credited with helping to rescue international momentum toward an agreement after the failure of the 2009 climate summit in Copenhagen.

Espinosa was “instrumental in picking up the pieces from Copenhagen and charting the course for the agreement in Paris,” Liz Gallagher, director of the Climate Briefing Service, told Climate Change News. Describing the diplomat’s record as “distinguished,” Gallagher said “it will be fantastic to have such a competent and experienced” executive at the head of the UN climate agency.