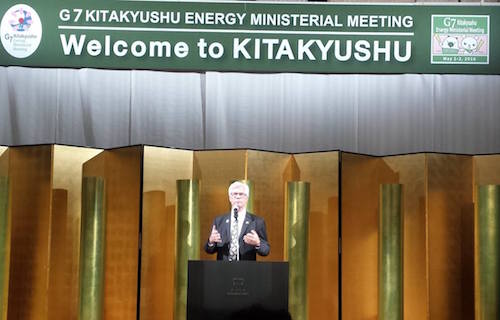 Canada committed to promote pipeline development and other measures to support the oil and gas sector at a meeting of G7 resource ministers in Kitakyushu, Japan on Monday, Bloomberg reports.

Seven years after the world’s top 20 economies promised to stop subsidizing fossil fuels, and 11 months after the leaders of the top seven said the world must phase them out entirely by 2100, Canada joined other G7 members in recommitting its support to oil and gas companies during the sector’s continuing downturn.

“We have an obligation to look at the longer term,” Natural Resources Minister Jim Carr told international reporters, citing a “consensus” among his G7 counterparts. “We all are feeling pressures at the moment because of low commodity prices. But are we preparing for 15, 20, and 50 years from now.”

According to Bloomberg, ministers from the leading market economies agreed on the need to “promote investing in energy projects through the oil price crash to ensure a steady stream of supply” in the next two decades.

In addition to encouraging private investment in fossil energy projects, the group agreed “to promote the development of natural gas infrastructure, such as pipelines and storage tanks,” and to support contract reform in the industry to favour “looser destination restrictions and prices linked to spot deals rather than oil” in the interest of creating more transparency in markets.

The International Monetary Fund has estimated Canada’s current subsidies to fossil fuels at $46.4 billion a year.