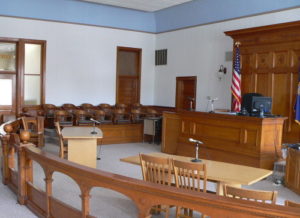 A group of seven teens and pre-teens in Washington State won a stunning legal victory Friday when King County Superior Court Judge Hollis Hill ordered the Washington State Department of Ecology to publish a greenhouse gas emissions reduction rule by the end of this year.

“This is an urgent situation,” Hill said of the climate crisis. “These kids can’t wait.”

The ruling also requires the state government to bring recommendations for science-based GHG reductions to legislators in 2017, and to “consult with the youth petitioners in advance of that recommendation,” EcoWatch reports.

The case is one of several that Eugene, OR-based Our Children’s Trust is pursuing to entrench the legal right to a healthy atmosphere and a stable climate.

“For the first time, a U.S. court not only recognized the extraordinary harms young people are facing due to climate change, but ordered an agency to do something about it,” said Western Environmental Law Center attorney Andrea Rodgers, who represents the seven petitioners.

“[The Department of] Ecology is now court-ordered to issue a rule that fulfills its constitutional and public trust duty to ensure Washington does its part to reduce greenhouse gas emissions and protect the planet.”

Last June, Hill wrote that the state’s “existing statutory (greenhouse gas) limits should be adjusted to better reflect the current science,” advising that “the limits need to be more aggressive in order for Washington to do its part to address climate risks.” Then in November, she concluded the state’s current standards failed its “mandatory duty” to “preserve, protect, and enhance the air quality for current and future generations.”

But “the Department of Ecology nonetheless unilaterally withdrew its proposed rule to reduce carbon emissions in the state in February,” EcoWatch notes, “just months after Judge Hill specifically underscored the urgency of the climate crisis.”

“It was absurd for Ecology to withdraw its proposed rule to reduce carbon emissions,” said petitioner Aji Piper, “especially after Judge Hill declared last fall that our ‘very survival depends upon the will of [our] elders to act now…to stem the tide of global warming.’” He added that “Judge Hill issued a significant ruling that should go down in history books. Our government must act to protect our climate for benefit of us and future generations.”