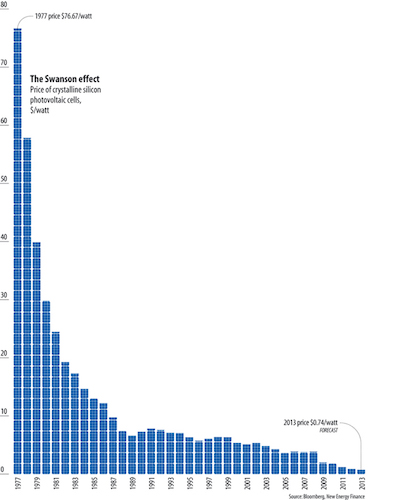 A leading energy, climate, and geoengineering advocate is admitting the “facts have changed” on the cost of photovoltaic technology, forcing him to revisit his assumptions about the cost and likelihood of widespread uptake of solar energy.

“I have long been skeptical of solar hype,” Harvard University’s David Keith writes on Greentech Media. But “over the last few years, solar PV has gotten cheap. Cheap enough to start impacting some commodity energy markets today. Cheap enough that with continued progress, but no breakthroughs, it might alter the global outlook for energy supply within a decade.”

In his analysis almost a decade ago, Keith thought he saw solar cost reduction curves flattening, and worried that deployment incentives “would simply lock in the current technologies and do little to drive the breakthroughs that were needed to get solar cheap enough to compete for commodity power,” he writes.

But since then, “a host of little innovations have driven costs down. Module prices are now around US$0.50 per watt. The unsubsidized electricity cost from industrial-scale solar PV in the most favourable locations is now well below $40 per megawatt-hour, and could very easily be below $20 per megawatt-hour by 2020. Compared to other new sources of supply, this would be the cheapest electricity on the planet.”

Resource: Electrek points to 10 charts on costofsolar.com that show the stunningly fast reduction in the cost of solar panels.