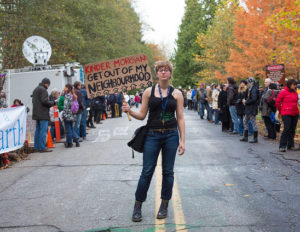 With Alberta Premier Rachel Notley and former PM Brian Mulroney both urging Trudeau to lead the charge for new fossil fuel pipelines, the Council of Canadians published an open letter from about 50 groups, declaring the projects incompatible with Canada’s commitments to help limit average global warming 1.5°C, protect drinking water, and respect the United Nations Declaration on the Rights of Indigenous Peoples (UNDRIP).

“Adding new pipelines will not solve economic woes caused by instability in world oil markets and a world that is rapidly—and necessarily—transitioning away from fossil fuels in order to safeguard our climate for future generations,” the groups wrote.

“We must proceed with a fair review of pipeline projects that includes all scientific evidence, welcomes public participation, and puts in place a climate test that ensures Canada doesn’t build infrastructure that makes the 1.5° limit on global temperature rise impossible. The review must include true consultations with Indigenous communities and respect the UN Declaration on the Rights of Indigenous People.”

The letter pointed to a new poll in which Albertans, by more than a two-to-one margin, said carbon tax revenues should be invested in green energy projects, transit, and energy efficiency.

Last week, meanwhile, First Nations leaders in British Columbia and Eastern Canada made it clear that “they have no intentions of softening their resistance to projects that would ship bitumen to coastal waters through their territories,” the Globe and Mail reports.

“To my knowledge, there isn’t an emerging groundswell of support in First Nations communities, or anything of that nature,” said Grand Chief Stewart Phillip of the Union of B.C. Indian Chiefs. “Premier [Christy] Clark and Premier Notley are talking to each other and Trudeau is talking to Notley, but they don’t want to talk to the Indigenous people who are standing in opposition to these projects. They want to dismiss and ignore the opposition and the concerns that underline that opposition.”

Trudeau has said fossil projects must have Indigenous support to proceed, the Globe notes. But “as it stands, many Aboriginal groups are unmoved after years of attempts by governments and industry to convince them that the environment and their territorial rights will not suffer harmful effects, and in some cases have turned down offers of equity stakes in projects. Their opposition raises thorny legal and constitutional issues.”

In the National Observer, Indigenous rights advocate Eriel Tchekwie Deranger, a member of the Athabasca Chipewyan First Nation in northern Alberta, pointed to the principle of Free, Prior and Informed Consent as the cornerstone of the UN Declaration. That signifies “Indigenous rights to not just participate in decision-making processes, but the right to say ‘no,’” she wrote.

“As the country moves to develop a national energy strategy and accompanying federal climate action plan, you would assume Trudeau—given his emboldened statements promising a renewed relationship with Indigenous peoples—would be taking this opportunity to flex his political muscle and prove to First Nations that he is a man of his word,” Deranger continued. “Yet nowhere in the federal budget has there been resources allocated for First Nations to meaningfully engage and participate in this consultation process on a nation-to-nation level, creating a real potential to leave Indigenous communities behind once again.”