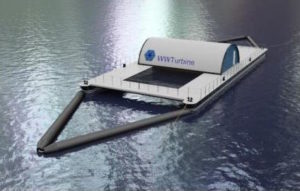 A plain-looking barge being built in the Vancouver suburb of Richmond could soon be demonstrating a new, low-cost, low-impact alternative to electricity generated from diesel fuel for remote communities on the British Columbia coast.

Global News reports that a $5-million barge being readied for trials next month will capture the kinetic energy from tidal sea flows to produce as much as one megawatt of electricity—enough to power as many as 500 homes. The unit is destined for installation at Dent Island, in the archipelago between northern Vancouver Island and the remote B.C. mainland. Its developer, Water Wall Turbine, says the paddlewheel turbine concealed beneath the barge will generate power at a cost of 15¢ per kilowatt hour, compared to the 65¢ for diesel.

Water Wall claims the low-revolution turbine avoids the risks to marine life associated with some other flow-through tidal turbine designs.

“Our device is a such a slow-moving device, it can’t harm anything going through it,” said Water Wall’s Marek Dredzki. “I’m prepared to swim myself through it to prove the point.”

Global reports that B.C. Hydro, currently pursuing a controversial $9-billion plan to build the Site C large hydro dam and on the Peace River, dismissed tidal power development as “not suitable for a large-scale public utility.”