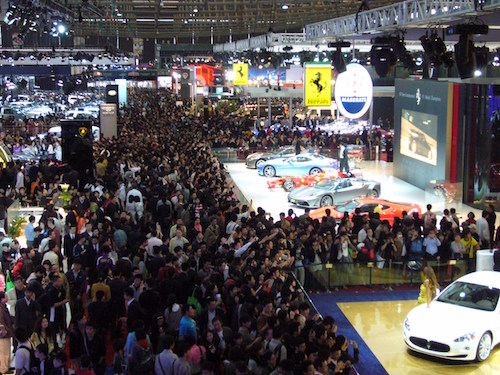 Chinese competitors are coming for Elon Musk’s crown as king of the electric car, reports from the Beijing auto show indicate, with multiple car-makers pursuing or already producing hybrid and all-electric vehicles for what may be the world’s biggest automobile market.

“Tesla’s a great company and has taken the global car industry to the EV era,” Jia Yueting, head of Beijing-based Le Holdings Co. (also known as LeEco) told Reuters. “But we’re not just building a car. We consider the car a smart mobile device on four wheels, essentially no different from a cell phone or tablet.”

The tech-focused company unveiled a concept car called the LeSee at the Beijing show, and with partners is building an assembly plant near Las Vegas to produce the vehicle to compete with Tesla’s upscale Model S.

Jia, whose other businesses have ranged from cell tower antennas to restaurants, private schools, and “China’s Netflix,” promises that his vehicle will present a “disruptive” pricing scheme that delivers “double the performance at half the price” of Tesla’s products, Reuters reports.

Other Chinese tech companies, meanwhile, have funded more than half a dozen new electric vehicle models. According to Bloomberg, Shenzhen-based BYD Co. (in which U.S. billionaire Warren Buffet holds a minority stake) has lapped Tesla in world-wide electric vehicle sales. In its home market, the company is outselling Tesla by more than three to one.

China’s government offers subsidies to both makers and buyers of electric vehicles, Bloomberg adds. Its goal is to push annual sales up by an order of magnitude by 2025, to exceed three million cars, truck, and buses a year.

China isn’t the only source of challenges for Tesla, which recently boasted that its in-development mid-price Model 3 had attracted more than a third of a million pre-orders. Germany’s Porsche is among other competitors determined to close in on the U.S. company’s reputational lead.