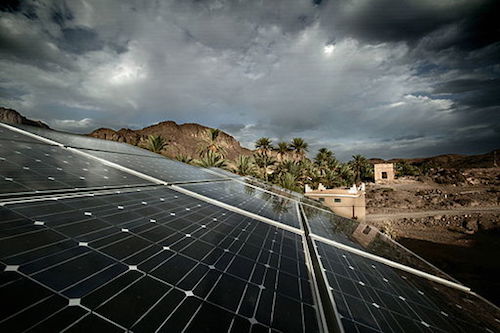 With enough political will and ambitious market design, a “supergrid” connecting North Africa and Europe and relying on photovoltaics, wind, and concentrated solar power could bring both regions close to 100% renewable energy by 2050, according to a study by Germany’s Fraunhofer Institute for Solar Energy Systems.

“Examining the possibility of a grid spanning Europe, Morocco, Tunisia, Algeria, Egypt, and Libya, the academics found that an interregional grid would enable high proportional use of renewable energy, shared and balanced across networks and key technologies,” PV-Tech reports. “With the right support, it would be feasible for the North African region to be exporting electricity across to Europe as well as covering its own demand,” which Fraunhofer modelled at 5850TWh by 2050.

The study “modelled four scenarios to 2050, with varying goals on emissions reduction and energy demand,” PV-Tech states. “The scenarios looked at the optimization of key technologies, with challenges that included integrating both HDVC DC cables and AC transmission, integrating energy storage, and reconfiguring energy markets to value demand” based on geography and time of day.

The study looked at the potential for interconnections among regions and greater reliance on energy storage, with Platzer reporting that the two “can be complementary technologies, rather than competitors in a Supergrid scenario,” reports correspondent Andy Colthorpe. “Storage with batteries, pumped hydro, or other technologies can reduce the requirement to transport electricity and evens out demand.” (h/t to InsideClimate News for pointing us to this story)