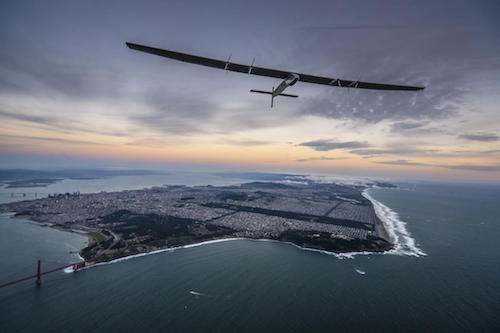 Solar Impulse 2 concluded the latest step in its round-the-world test flight with a touchdown in Mountain View, California April 24, nearly 10 months after being grounded by technical problems, but without using a single drop of fuel.

It took the plane 2½ days to complete the voyage from Hawai’i to California.

“It’s a new era. It’s not science fiction. It’s today,” said pilot Bertrand Piccard. “It exists, and clean technologies can do the impossible.”

“I’m very happy that everything works extremely well and the airplane is functioning as it should,” said Piccard’s business partner and alternate pilot, Swiss engineer Andre Borschberg. “It’s a demonstration that the tech is reliable.”

Before landing, Solar Impulse 2 “flew holding patterns for several hours above San Francisco Bay in celebration of the achievement,” CNN reports. The plane has the wingspan of a Boeing 747, and weighs about as much as an SUV.