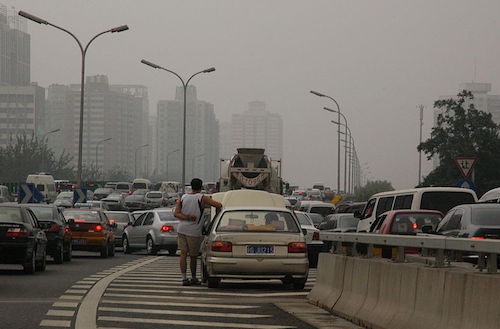 Royal Dutch Shell PLC set out to tout the internal combustion engine in the world’s biggest market for electric vehicles, with the release of a high-efficiency petrol-burning concept car ahead of this week’s Beijing auto show.

“This project aims to see just how good we can be with something manufactured today,” said Andrew Hepher, Shell’s vice president of lubricant technology. The three-seat vehicle can travel 100 kilometres on 2.6 litres of gas, the equivalent of about 89.1 miles per gallon.

“We’ve been absolutely obsessive about weight reduction and streamlining,” said lubricants manager Bob Mainwaring. “The car is a thought leadership paper on wheels.”

Shell, one of the world’s biggest gasoline producers, “has no intention of mass producing” the vehicles, but is trying to show “that there is a lot of mileage left in conventional internal combustion engines,” Reuters reports. The news agency calls the launch “ironic, as the government of smog-plagued China is heavily promoting new-energy vehicles through subsidies and other incentives, helping sales of electric and plug-in hybrids quadruple in 2015.”