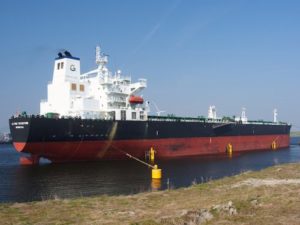 The global oil glut is causing a massive traffic jam at sea, with more than 100 supertankers sitting at anchor for up to three weeks while they wait for port access to drop off about 200 million barrels of crude.

“There just appears to be more oil than can be dealt with,” Matt Smith, director of commodity research at ClipperData, told CNN. “They haven’t got anywhere to put it.”

The bottlenecks are costing shippers up to $6.25 million per day based on the going rate for ship rentals, according to Reuters. “If the congested tankers were lined up bow to stern, the lineup would be about 40 kilometres long,” HuffPost reports.

Correspondent Jesse Ferreras reports that the increased production behind the crash in global oil prices has also led to higher demand from oil refineries in China. Now, supertanker ports in Asia can’t keep up with the traffic. The crew on one tanker spent three weeks anchored off Qingbao, China, watching movies and playing music to pass the time. (h/t to James McNeil for pointing us to this story)