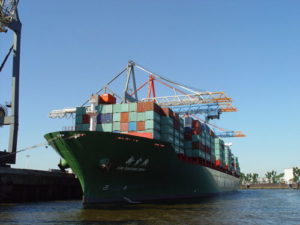 The International Maritime Organization (IMO) closed out a meeting in London, UK last week without agreeing on a work plan to contribute to the Paris agreement goal of limiting average global warming to 1.5 to 2.0°C.

Transport & Environment said the “divisive debate” at the meeting left the international shipping industry’s response to Paris “in disarray,” with key developing countries “opposing the call from Pacific island nations, developed countries, and much of the industry to develop a post-Paris work plan on what emissions cuts would be needed.”

The United States and China both argued it would be premature to set an emissions target for international shipping until data from individual ships had been gathered and analysed, ClimateHome reports. Shipping emissions researcher Tristan Smith of University College London dismissed that argument, noting that his own data showed the industry’s carbon output on a par with Germany’s. He forecast that shipping emissions would grow 50 to 250% without corrective action.

“The IMO has fallen flat on its face in the first test of its determination to tackle greenhouse gas emissions after Paris, unable even to agree to develop a work plan for reducing ship emissions,” said John Meggs, senior policy advisor with Seas At Risk. “Despite a large majority of member states and industry supporting action, the IMO proved unable to translate this into progress, instead allowing itself to be held hostage by a handful of BRICS and the maverick and increasingly isolated Cook Islands.”

“How extraordinary it is that the IMO can’t agree that the Paris climate deal will require the shipping industry to even assess what it needs to do in response,” agreed T&E Shipping Director Bill Hemmings. “Key developing countries seem to be in denial.”