‘The Earth Ups the Stakes’ as 160 Countries Sign Paris Accord 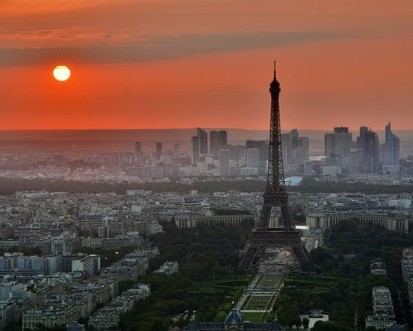 The Earth itself “has dramatically upped the stakes” on the Paris agreement, the Washington Post reported yesterday, in a set-up piece for the historic signing ceremony involving an anticipated 160 countries at United Nations headquarters later today.

The Post’s roundup of recent news milestones from the world of climate science underscores the need for countries to sign, ratify, implement, and rapidly move far beyond the limited targets in a global pact that is historic, but insufficient on its own to avert runaway climate change.

“I can’t overestimate the political importance that every country is involved. That’s absolutely crucial,” said independent energy and environment consultant Paul Bledsoe, a former adviser on climate in the (Bill) Clinton White House.  “It really is a testament to a profound political evolution. But we do have to recognize what it is and what it isn’t. It’s an incredibly important step that gets us half-way there, but it’s not in and of itself the ultimate solution.”

“If you take Paris as the last word, of course it’s not enough,” said Princeton University geoscience and international affairs professor Michael Oppenheimer. “It’s merely the first step in a new direction,” and “it’s certainly better than the alternative of countries having left Paris with their hands up in the air.”

Reporters Chris Mooney and Brady Dennis trace the litany of recent news pointing to the scope of the climate crisis, and the urgency of a global response that has begun to accelerate following the UN climate conference in Paris in December.

“The first three months of 2016 have been the hottest ever recorded, and by a large margin,” they write. “Greenland’s massive ice sheet melted more this spring than researchers have ever seen. Warming seas are turning once-majestic coral reefs into ghostly underwater graveyards. And scientists are warning that sea levels could rise far faster than anyone expected by the end of the century, with severe impacts for coastal communities around the globe.”

For those reasons and many more, the UN signing ceremony “simultaneously will be a moment of understandable celebration and sobering reality,” they note. “In the four months since that rare moment of global accord, the near-constant reminders about shifts in the Earth’s climate have underscored that staving off the worst consequences of global warming may require increasingly ambitious actions.”

Even if all countries hold to the voluntary commitments in the Intended Nationally Determined Contributions (INDCs) they filed with the UN climate secretariat in the lead-up to the climate conference, their collective actions will only be enough to reduce average global warming to 2.7°C/4.8°F at best. In Paris, negotiators agreed on a long-term limit of 1.5°C, going beyond  the 2.0°C goal that had been in place since the 2009 UN climate conference in Copenhagen.