Two-Passenger EV Will Look Like ‘Oversized Trike’, Sell for $12,000 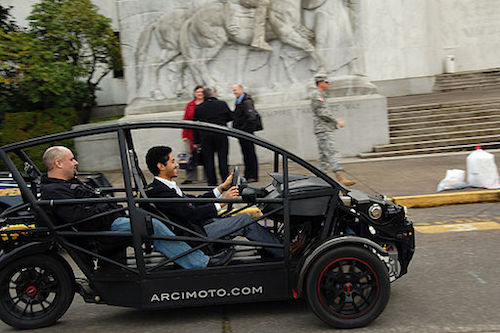 It may look like an oversized tricycle with a hard-body shell, rather than a conventional sedan. But with room for two passengers plus groceries and a projected price tag of $US12,000, the Arcimoto SRK could be the first electric car to really qualify for the term ‘affordable’.

While existing all-electric models are priced on par with luxury cars, and even the promised mass-market Tesla Model 3 will carry a sticker price of about US$35,000 before options, Oregon start-up Arcimoto intends to begin producing its stripped-down urban three-wheeler later this year for around one-third the price of Tesla’s entry-level vehicle.

“The development quest has been to tick all the boxes for the type of daily driving we do, going to work, going to the grocery store, going out on a date,” company founder and president Mark Frohnmayer told Treehugger. “And to do that on pure electric for a cost that is affordable for the mass market.”

The vehicle will feature enclosed cabin seating for two with cargo space (and snap-in body parts), a full roll cage, and belt harnesses for both occupants, but will weigh about a quarter as much as a standard car. Its maker says it will deliver a top speed of 128 kilometres per hour, and go from zero to 96 kph in 7.5 seconds. The SRK is expected to have a range of about 110 kilometres per charge on a 12-kilowatt/hour battery, or nearly twice that on an optional 20-kWh battery. And according to Arcimoto, the enclosed vehicle isn’t considered a motorcycle, so it won’t require a helmet or special licence.

The company is taking reservations with a US$100 deposit—exactly 10% of the deposit on that down-market Tesla.