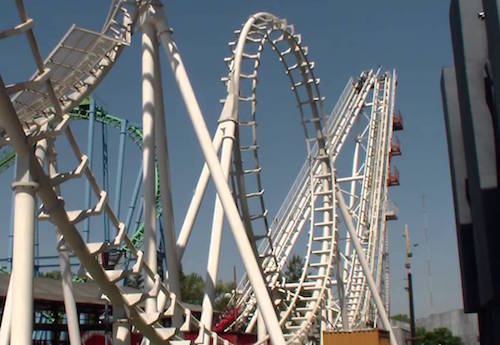 With Alberta seeing a record-low contribution to its provincial budget from oil royalties, now is the perfect time for the province to step off its boom-and-bust revenue roller coaster, argues University of Calgary economist Trevor Tombe.

“Despite much posturing by politicians over the years, no one—neither past PC governments nor the current NDP—seems willing to move past our historic reliance on volatile resource revenue,” Tombe writes in a graph-laden essay in Maclean’s. “That’s unfortunate, and it’s a missed opportunity. After all, the smart time to get off a rollercoaster is when it’s at the bottom. And that’s today.”

Alberta has counted on resource royalties—mainly from tar sands/oil sands and conventional oil and gas—for between 20 and 30% of its provincial budget in this century, and as much as 80% in the late 1970s. This year, that contribution will fall below 10%.

Which is why Tombe compares Alberta’s reliance on resource commodity royalties to riding a roller coaster. “The view from the top is spectacular, but it never lasts,” he warns. “Suddenly and without warning, you drop. Faster and faster you fall, screaming, heart racing, and wishing you were anywhere but here.

“But when you finally reach the bottom, what do you do? You don’t get off. You can’t fight the urge. You can’t wait to go back up. It’s a rush!”

Tombe warns that if resource royalties fail to recover as the provincial government expects, Alberta may face persistent deficits well into the next decade, perhaps even beyond.

He emphasizes that his observations are cause for “concern, yes; panic, no,” and declines to “indict” the spending contemplated in Alberta’s recent budget. “There is no cause for short-term, knee-jerk reactions. Alberta’s fiscal situation is in very good shape.”

But while “there’s no need to raise taxes now or cut spending now,” Tombe says, “we can certainly plan for the future,” by shifting provincial revenues to a more stable footing than volatile resource royalties.

“How should we raise revenue?” he asks. “If you value the economy, the answer is clear: a sales tax—an HST.”