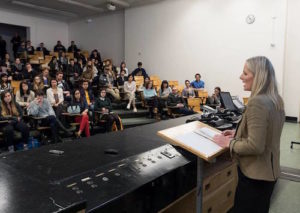 Put Canada’s third-largest oil company and its U.S.-based global parent in the “crazy” column, according to Climate Change Minister Catherine McKenna, likely to miss out on “a $3-trillion opportunity.”

With Prime Minister Justin Trudeau preparing to join leaders from 147 other countries in signing the Paris climate accord in New York on Friday, the carbon-cutting pact seems likely to come into force years sooner than expected. Speaking at the World Bank last week in Washington, McKenna said the clean energy transition it heralds is a “$3 trillion opportunity.”

“As I say to business, ‘You’re crazy if you’re not thinking about this,’” McKenna said. “If you’re in oil and gas, you should be thinking about renewables. That’s a huge opportunity for you, for your shareholders.”

“Oil companies have a choice,” agreed Greenpeace campaigner Keith Stewart. They can “transform themselves into clean energy providers, or go the way of the dinosaur.”

Yet the opportunity McKenna sees is one that Calgary-based Imperial Oil and its parent, Exxon, dismiss in recent statements to shareholders. Imperial, the National Observer reports, has circulated a note in advance of its 2016 annual general meeting, saying that it expects “strong performance” from its operations “over the long term”. The company expects to add a $2-billion tar sands/oil sands facility to its production capacity by 2022.

Exxon’s 2016 energy outlook sees a future entirely different from the one that McKenna sketched. “We expect that oil, natural gas and coal—the three fuels that together built the modern economy—will continue to meet almost 80% of the world’s energy needs through 2040,” it asserts, with oil demand rising by 30% over that time. Exxon, under investigation by more than a dozen U.S. state attorneys general for alleged criminal concealment of its knowledge of climate change as early as 1970, owns 70% of Imperial Oil.