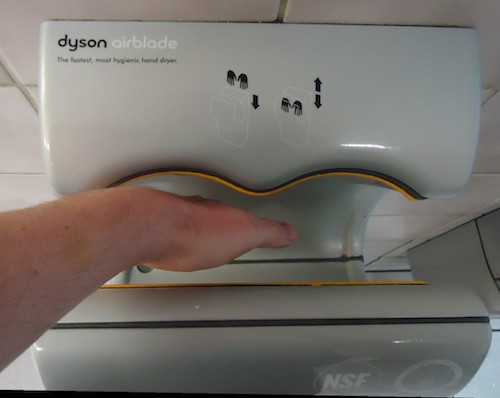 The paper towel industry is trying to scaremonger the Dyson hand dryer company, TreeHugger maintains, after a study in the Journal of Applied Microbiology concluded that the company’s jet air dryers spread 1,300 times as much airborne bacteria as using paper towels in a public washroom.

“Measuring splatter at different heights right next to the device, jet air dryers produced (on average) 1,300 times more plaques than paper towels, and 60 times more than warm air dryers,” Microbe Post reports. “The authors note that the maximum number of plaques were found between 0.75 and 1.25 metres—about the height of a small child’s face when standing next to a parent.”

“Our research and results over the years have revealed time and again that single-use towels are the safest way to dry one’s hands in the washroom,” report co-author Keith Redway told the European Tissue Paper Association.

But The Independent had a different take on the research. “Peter Henderson, a spokesman for Dyson, said that in everyday situations, it would be unlikely for hands to have such high levels of virus contamination as used in the study and that, in any case, the process of washing hands before they are dried has, as its very purpose, the aim of getting rid of germs,” the paper reports.

“The paper towel industry has scaremongered with this research for the past four years,” Henderson said. “It has been conducted under artificial conditions, using unrealistically high levels of virus contamination on unwashed, gloved hands.”

In the decade since that comparison was made, Alter says, the numbers have only gotten better: More coal plants have been phased out, and Dyson’s new Airblade dryer uses 83% less energy than its predecessors.