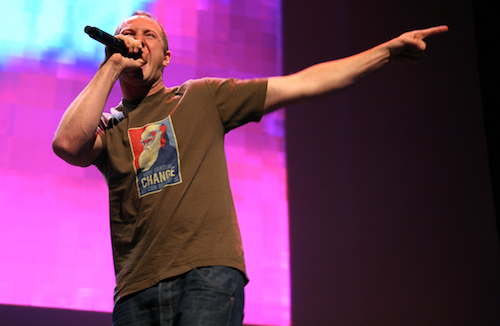 You know climate communicators are getting serious when they subject their rap performances to peer review.

That’s what playwright and performance artist Baba Brinkman did with his carbon pricing rap, Make It Hot, first performed at Edinburgh Fringe in 2015.

“Scientists are telling us that we’re perching on a precipice,” Brinkman begins. And we need to convert the global economy and make it emission-less. And those emissions are caused by every single one of our jobs, every one of us contributing carbon emissions to the smog.”

Brinkman points to carbon pricing as a way out of the crisis, but not before acknowledging his own role as an emissions producer. “If I write a rhyme tryin’ to describe climate change, and it’s hot, so it catches on, pretty soon someone’s gonna fly me someplace. To perform it, and the appeal of that is enormous. It’s not an option for me to turn down work for global warming.” (h/t to The Energy Mix subscriber Gary Martin for pointing us to this story)