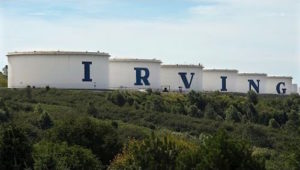 “We will add Western Canadian crude to our portfolio as the economics dictate, but probably not at the expense of our Saudi barrels,” he told the Post’s editorial board.

The refinery, Canada’s largest, processes 320,000 barrels of crude per day, one-third of it from Saudi Arabia and another third imported from the United States.

“This is a prime example of what we’ve been saying for months: you can bring Western Canadian crude to the East, but you can’t make refiners drink it,” said Smarter Shift analyst Shelley Kath. “They want diversity of supply, but also cheap pricing, and they must respect long-term contracts and business relationships.”

During his editorial board session, Whitcomb described Energy East as “a really important project for Canada,” adding that “we are spending so much Canadian capital to buy oil outside of Canada, and those dollars should stay inside.” (Editor’s note: Except when they don’t.)

“I’m frustrated that it hasn’t moved ahead. I think Energy East, particularly, is critically important to this country from an economic perspective,” agreed Scotiabank CEO Brian Porter. “I would have liked to see further political progress on it at this stage, but it’s going to take time. I’m a realist. But I think that the time for consensus building, all those other things, is over.”