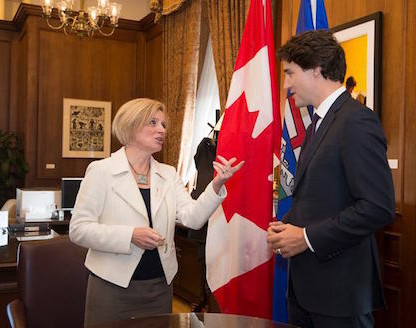 Citing unidentified “people with knowledge of the matter,” the pro-fossil National Post reports that Prime Minister Justin Trudeau has pre-empted Canada’s National Energy Board and “told senior lieutenants to make the Energy East pipeline and the Trans Mountain [pipeline] expansion a reality.”

The PM “has never been an advocate of a Canadian future without oil,” writes columnist John Ivison. “He supported the Keystone XL pipeline, and explicitly stated that no country that found 170 billion barrels of oil would leave it in the ground.” Now, he says, Trudeau has become convinced that the national economy requires moving Canadian crude to world markets.

Decisions on both Kinder Morgan’s Trans Mountain proposal, which would carry diluted tar sands/oil sands bitumen to Pacific tidewater at Vancouver, and TransCanada Corporation’s Energy East, which would have its shipping terminus at Saint John, NB, are currently before the national energy regulator.

Assuming the agency gives either or both of the projects the green light, the final decisions would rest with the federal cabinet—which presents Trudeau with complex political challenges. Opposition to pipelines is strongest in British Columbia, a vital source of government seats. But if Trudeau hopes to rebuild his party’s chances in Alberta—where it currently holds only one seat—he dare not revive memories of the affront that many in the province still feel over his father’s National Energy Program, which in the 1970s forced Alberta to accept then-lower world prices for its oil. Meanwhile, Quebec has subjected Energy East to an independent environmental audit.

Environmental groups, the Post notes, may further entangle the politics of any pipeline approval. Environmental Defence Program Manager Adam Scott pointed out that the Trudeau government has issued a policy requiring that pipeline proposals face a climate test, to assess their compatibility with Canada’s commitment to help keep global temperatures below 1.5ºC above pre-industrial levels.

“Trudeau has established credibility on the environment and polls suggest he is trusted to make the right decision by a majority of Canadians (unlike his predecessor),” the Post writes. “He has made much of openness, evidence-based policy and acting as a referee, not a cheerleader, on the pipeline process.”

Nonetheless, the paper insists, the Prime Minister’s mind is already made up that “progress” means bringing Canada’s landlocked fossil fuels to world markets.