Half of Vancouver Could Be Underwater by 2100 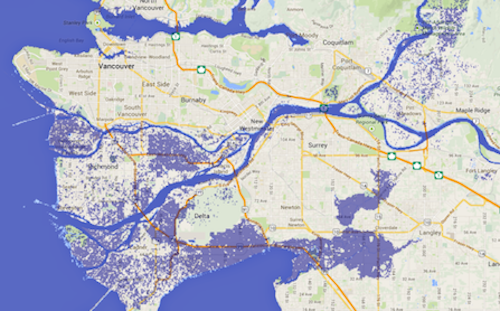 New insight into how ice sheets behave suggests the oceans will rise twice as fast as thought this century—putting at risk Vancouver’s international airport and southern suburbs, along with much else around the world.

Published in the journal Nature, the new research identifies ice dynamics that could lead to much more rapid loss of Antarctic ice sheets than previously thought, the Washington Post reported.

In one dynamic, relatively warm ocean water is seeping underneath ice sheets that have hitherto been frozen to bedrock below sea level. As it does, the ice becomes detached from the rock, floats free, and melts faster. That in turn frees the main ice sheet to flow more quickly to the sea, further increasing the speed of its melting.

In another, retreating ice sheets, some up to two kilometres thick, expose increasingly high ice cliffs to the sea. When these reach about 100 meters high however, they become unstable and collapse under their own weight.

The newly-identified dynamics would add about another metre to the estimated one metre of sea rise already identified as probable this century, absent sharp reductions in climate emissions (and possibly even with them).

Historic sites along the U.S. seaboard and dozens of London’s busiest underground stations are among locations that have recently been identified as vulnerable to the lower estimate of ocean rise. Two metres of sea level rise would, among other consequences, put Vancouver International Airport, which sits on an island, underwater, along with the city’s southern suburbs of Richmond and Delta.

“Under the high emissions scenario,” said Ben Strauss, who monitors sea levels for Climate Central, “the 22nd century would be the century of hell.”