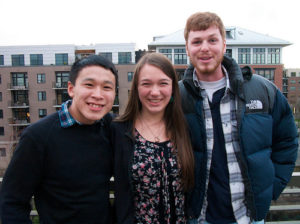 A group of 21 youth plaintiffs aged eight to 19 won an important victory last week when a judge in Eugene, Oregon refused to dismiss their constitutional challenge against the U.S. government for failing to protect them from the harmful effects of climate change.

The U.S. political stalemate on climate change “”necessitates a need for the courts to evaluate the constitutional parameters of the action or inaction taken by the government,” said U.S. Magistrate Judge Thomas Coffin. “This is especially true when such harms have an alleged disparate impact on a discrete class of society.” The Oregonian casts that last comment as “a nod to the plaintiffs’ argument that government inaction on climate change violates the rights of future generations.”

Plaintiff Kelsey Juliana called Coffin’s ruling “a tipping point on the scales of justice,” adding that “this will be the trial of the century that will determine if we have a right to a livable future, or if corporate power will continue to deny our rights for the sake of their own wealth.”