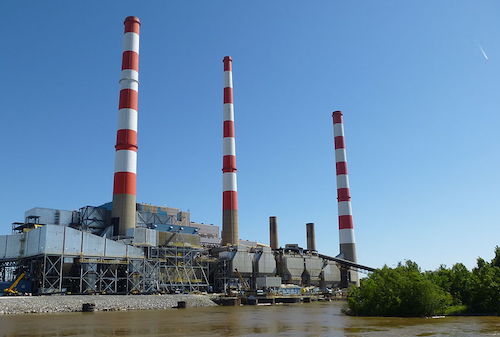 New “downstream” fossil fuel installations like pipelines and power plants may not be able to operate long enough to recover the money investors pour in to get them built, according to an Oxford University study published last week in the journal Applied Energy.

“Like power plants, pipelines and new oilsands operations take decades to earn back their initial investment costs. If the investor is sure the stream of future income is secure, the investment is well worthwhile,” CBC reports.

“But the Oxford researchers calculate that for the world to limit climate change to 2°C as agreed at COP21 in Paris, many planned new energy developments cannot go ahead. Or, if they go ahead, other existing projects will have to be shut down.”

If countries are serious about limiting average global warming to 2°C above pre-industrial levels, “current and future assets will have to be written off before the end of their economically useful life (become stranded assets), or we will have to rely on large-scale investments down the line in carbon capture and storage technologies that are as yet unproven and expensive,” the report notes.

That means “investors putting money into new carbon-emitting infrastructure need to ask hard questions about how long those assets will operate for, and assess the risk of future shutdowns and write-offs,” said report co-author Cameron Hepburn.

“It’s an equation that doesn’t add up,” she told The Tyee. “It’s like when Obama talked about the ‘all of the above’ energy policy. In theory, that sounds great, but it doesn’t work.”

She said development of new fossil fuel infrastructure would lock in production for the next 50 to 100 years, just as humanity begins a 30-year sprint to decarbonize by mid-century.

“If you could say, ‘we’re going to have oil and gas development just for the next 10 years, and we’re going to take all that revenue to develop sustainable energy and communities, then we’re going to shut it all down,’ that would be okay if you could actually do that,” she said. “But in what world do you shut down a functioning oil field that still has plenty of production left? In what world do you shut down a pipeline that still has oil and gas flowing through it?”