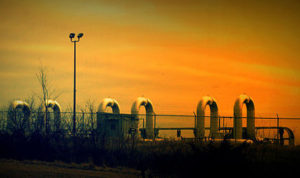 An April 7 news release from TransCanada Corporation acknowledged a wee discrepancy in its estimate of the oil leaking from its Keystone pipeline near Freeman, South Dakota, increasing the tally from 4.5 to 400 barrels (187 vs. 16,800 gallons).

On glutted global oil markets, meanwhile, the loss of 590,000 barrels per day of Canadian crude oil was met with shrugs, with surplus U.S. oil stockpiles actually increasing while Keystone was shut down. U.S. crude oil prices dropped as low as US$36.69 per barrel, before settling at $37.26.

“It’s coming at a time when there is no shortage of crude in that part of the system,” fossil industry consultant John Auers of Turner Mason & Co. told Bloomberg. “At a different time, the impact would be much greater.”

In South Dakota, “the volume estimate reported this morning to the National Response Center (NRC) and the Pipeline and Hazardous Materials Administration (PHMSA) was based on the safe excavation of soil to expose more than 100 feet of pipe,” wrote TransCanada spokesperson Mark Cooper. “It takes into account a number of factors, including oil observed in the soil and the potential area impacted.”

The new estimate “puts the spill among the largest in state history for a pipeline,” the Sioux Falls, SD Argus Leader reports. “The spill already was the largest since Canadian tar sands crude began to flow in 2009, based on the initial report of 187 gallons.”

The spill “highlights the need for us to hold TransCanada accountable for their actions, but to use this as an example of the legitimate concerns that people have with future pipelines like Dakota Access,” said Dallas Goldtooth of the Indigenous Environmental Network.

“Landowners’ worst fears came true,” added Jane Kleeb, head of Bold Nebraska. “When you have a pipe running through your farm or ranch land, all you think about is: it could break today.”

DeSmog Blog reports that the spill had TransCanada “scrambling again,” noting that the company “didn’t have a representative at the potential spill site until Sunday. But by Monday, when the media broke the news, TransCanada had blocked off the area, making documenting the contaminated area from the ground impossible.” Bold Nebraska told DeSmog it was also impossible to photograph the site from the sky.

“To have the FAA close off airspace for a foreign corporation is a big problem,” Kleeb said. “We want to take our own pictures. With 100 clean-up workers on site, we have a right to be taking our own pictures and finding out our own information.”