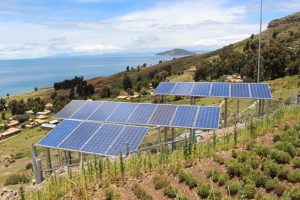 Rural electricity co-operatives that serve 42 million Americans and supply 12% of the country’s electricity are getting excited about community solar projects that offer better economics and wider portfolio diversification than coal generation, while allowing co-ops to meet growing member demand and stay ahead of regulations like the Clean Power Plan, the Rocky Mountain Institute reported last week.

“Rural electric co-operatives are spreading the word on how local clean power can save money, support communities, and diversify energy supplies,” RMI reports. “Community-scale solar is becoming an important tool for rural electric co-operatives as they begin their transition from a centralized, fossil fuel-based energy system to an increasingly distributed and renewable system.”

With output in the range of 500 kilowatts to five megawatts, community solar “is at the sweet spot between utility-scale and behind-the-meter solar,” the Institute notes. “It simultaneously leverages the economies of scale of utility-scale solar with the many distributed benefits of behind-the-meter solar.” Key attributes for co-ops include local control of energy production, appropriate sizing of energy installations, local jobs and tax revenue, and reduced transmission and distribution losses in areas with relatively low population densities.

Beyond the co-op community, a recent study by the Deloitte Center for Energy Solutions found that community solar could fill the gap for the estimated three-quarters of U.S. homes where it would be impractical to install rooftop solar directly.

“Community solar allows utilities to offer solar to a customer base that is interested and wants solar and can’t get it on their own because they don’t have the right roof or their own roof or a good enough credit score,” said Deloitte Alternative Energy Leader Marlene Motyka said. “They might not have the rooftop option, but they really want to be able to invest in and get electricity from solar.”