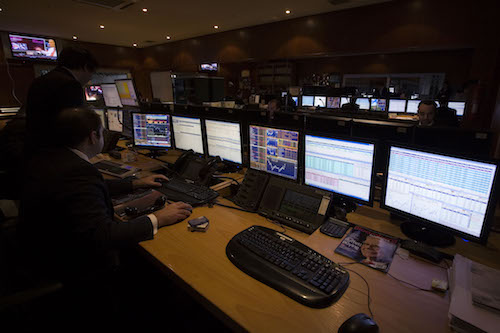 The liquidity of the world’s oil and gas companies—roughly a measure of their unencumbered cash on hand—has never been worse, New York credit ratings agency Moody’s reports in its latest Liquidity Stress Index.

While the stress index for non-oil and gas debt issuers lifted slightly to 4.8% in March, from 4.1% in February—well below its long-term average of 6.5%—the energy component of the index “jumped to a record high of 31.6% from 27.2%” over the same period.

The LSI percentage indicates the share of corporate debt issuers with Moody’s lowest possible liquidity rating. “The difference in this cycle,” the agency’s John Puchalla said, “is that weakness in energy is fuelling the [Index] gains, rather than broader liquidity pressures.”

The record liquidity crisis in fossil fuels, and what Moody’s described as “a slew of downgrades of energy issuers,” pushed the overall stress index for all corporate debt issuers up by more than a percentage point to 10.3% in March.

Beyond oil and gas, Moody’s reported, “five of the seven downgrades to SGL-4 [its lowest rating] outside of oil and gas in March were tied to the commodity drought, including suppliers to the energy industry, and coal miner Peabody Energy.” The agency predicted that defaults in the oil and gas sector will rise from 3.6% of debt issues this year to 5.3% by next February.

Audit and consulting firm Deloitte earlier warned that as many as one in three fossil producers may not survive the year.