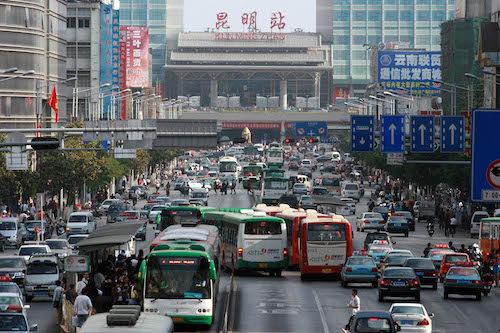 America may have invented car culture, but China is well on the road to rolling out large numbers of driverless automobiles first, the New York Times suggests.

Car ownership is a status symbol among China’s newly wealthy, but massive traffic jams and heavily polluted air in urban corridors make their use less of a pleasure. As a result, “some argue that conditions in China are actually more favourable for quick adoption of driverless cars” than in the United States, the Times reports.

In part that’s because automated vehicle technology has “more aggressive support from national and local governments” in China, eager to reduce exhaust emissions and traffic congestion. And “unlike in the United States,” the Times adds, “China never fully developed a romance with the open road and car ownership.”

“It’s not that people are more willing to use the cars in Beijing or Shanghai,” Mosquet observed. “It’s that the economic value is much higher in China than in the U.S.” As well, Chinese governments at every level have encouraged the industry’s research and development.

China’s Leshi Internet Information and Technology has a driverless car unit, and carmaker Great Wall Motors has opened a research centre in Silicon Valley, the Times notes. “The assumed leader in the field in China is the search engine company Baidu, which has been at work on autonomous vehicles since 2013. Baidu has teamed up with BMW and recently said it was testing its technology in the United States.”

Baidu says it will introduce automated driving to China within 24 months, the paper says, but there are hazards to be negotiated: “In China, roads often have poorly marked lanes and little signage. People, animals, three-wheel rickshaws, and trucks are liable to veer in front of a car at any time.”