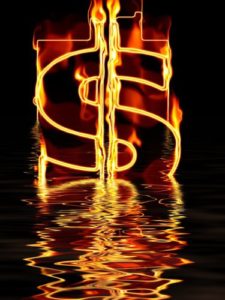 US$2.5 to $24 trillion of the world’s financial assets could be at risk by 2100 if no action is taken to slow the rate of global warming, according to a study published Monday in the journal Nature Climate Change.

Across a range of scenarios, that means climate change could wipe out 1.8 to 17% of global assets. The economic models behind the study placed the likelihood of the worst outcome at 1%, even though that scenario was based on average global warming of 2.5°C/4.5°C—well above the targets set at the 2015 UN climate summit in Paris, but far below the most dire warming predicted by many modelling studies.

Worst-case scenarios are “often used by regulators to check the financial health of companies and economies,” the Guardian reports. “The losses would be caused by the direct destruction of assets by increasingly extreme weather events, and also by a reduction in earnings for those affected by high temperatures, drought, and other climate change impacts.”

“Our work suggests to long-term investors that we would be better off in a low-carbon world,” said lead author Prof. Simon Dietz of the London School of Economics, co-director of the LSE’s Grantham Research Institute on Climate Change and the Environment. “Pension funds should be getting on top of this issue, and many of them are.”

He added that “the nexus of climate change and investment is not just coal companies and oil and gas companies. It’s a much broader set of companies. In fact, it could be an issue at the whole-economy level.”

The study found that the infrastructure investments required to keep average warming to 2°C would be more than offset by reduced risk to financial assets, so that “the value of global financial assets would be $315 billion higher than if the planet were allowed to warm by 2.5°,” InsideClimate News reports.

“That was a bit of a surprise to us,” Dietz said. “A lot of economists have thought that you maybe need a broader perspective than just narrow financial assets, and you might need a longer time horizon than just this century to support the case for reducing emissions, but we don’t find that.”