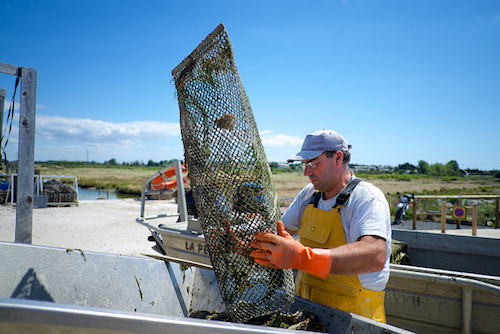 In a post last month on Medium, Long Island, New York ocean farmer Bren Smith tells a story of “ecological redemption” in which the “industrialization of food” and the pillaging of the world’s oceans set the stage for the development of vertical underwater farms that can deliver food, fuel, fertilizer, feed—and a powerful contribution to climate solutions.

“I grew up shooting moose out of my kitchen window,” Smith writes. “I never thought climate change had anything to do with my life. But it does. From my vantage point, climate change is not an environmental issue at all—it’s an economic issue.”

Smith traces his own path to sustainable food production—from industrial fishing, to an aquaculture farm that “was supposed to be the great solution to overfishing,” to oyster fishing on Long Island Sound.

That gig lasted seven years, but “then the storms hit. Hurricane Irene and Hurricane Sandy thrashed the East Coast. Two years in a row, the storms buried 90% of my crops in three feet of mud, and 40% of my gear was washed away in a sea of death. At the same time, lobster were being driven northward by warming waters, and acidification was increasing faster than at any other time in 300 million years, killing billions of oyster seed up and down the American coast.”

Around the same time, 83,000 New Yorkers lost their jobs because of flooding, unemployment claims in Vermont doubled, and droughts scorching 80% of U.S. farmland faced drove up food prices for working families. “Suddenly I found myself on the front lines of a climate crisis that had arrived 100 years earlier than expected.”

Smith responded with a design for “a vertical underwater garden with hurricane-proof anchors on the edges connected by floating horizontal ropes across the surface. From these lines kelp and Gracilaria and other kinds of seaweeds grow vertically downward next to scallops in hanging nets that look like Japanese lanterns and mussels held in suspension in mesh socks. Staked below the vertical garden are oysters in cages and then clams buried in the sea floor.”

The “3D farms” have three purposes: to deliver delicious seafood in an era of overfishing and food insecurity, transform fishermen into “restorative ocean farmers,” and “build the foundation for a new blue-green economy that doesn’t recreate the injustices of the old industrial economy,” Smith writes.

“Our underwater farms have a low aesthetic impact. That’s important because our oceans are beautiful pristine places, and we want to keep them that way,” he stresses. “Because the farm is vertical, it has a small footprint. My farm used to be 100 acres; now it’s down to 20 acres, but it produces much more food than before. If you want ‘small is beautiful,’ here it is. We want ocean agriculture to tread lightly.” (h/t to Adrian Irving-Beer for first pointing us to this story)