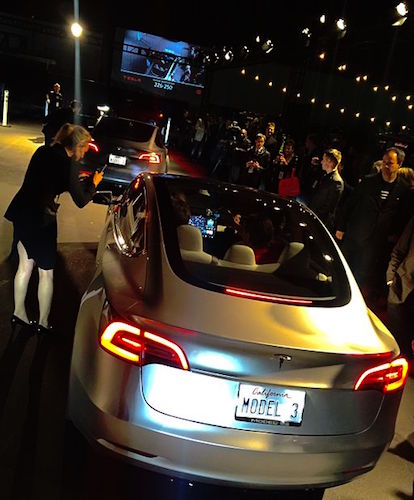 Tesla Motors founder Elon Musk unveiled the long-promised and still not quite showroom-ready everyperson’s edition of his electric car line—the Model 3—at a splashy media reveal on March 31, to a rapturous welcome from would-be owners and a more cautious assessment from industry observers.

Within days of the Model 3 unveiling, Tesla said 276,000 people had put down US$1,000 deposits on their future dream car by late Saturday, representing an eventual sale value above US$8 billion—a result that doubled Tesla’s expectation and even took Musk by surprise. “Definitely going to need to rethink production planning,” he tweeted.

From the outside, the most distinctive features of the three examples brought on stage were the front-and-rear trunks and a sleek, one-piece glass roof. The technology inside, Musk promised, would deliver a driving range of 346 kilometres (215 miles), acceleration from zero to 96 kph (60mph) in under six seconds, and carry a base price of US$35,000—which U.S. customers could reduce to $27,500 by applying federal tax credits.

But you can’t have one just yet. Musk predicted the first production Model 3s won’t roll off Tesla’s assembly line and into drivers’ hands for at least 18 months, saying he was “fairly confident” deliveries would begin by the end of 2017.

The base price is likely to rise quickly once consumers start ticking off options, industry watchers said. Nonetheless, the Model 3 will sport a much more affordable price than Tesla’s higher-end Models S and X, whose drive-away costs hover around US$100,000.

Business analysts were less starry-eyed in their assessments, National Public Radio reports. They noted that for all Musk’s acknowledged vision, his company has yet to show a profit to support its $30-billion market capitalization. Charging stations remain far from ubiquitous. And the subsidies that push the Model 3’s price under US$30,000 will expire after the industry as a whole has sold 200,000 vehicles.

Meanwhile, bigger competitors may be poised to seize more of Tesla’s customers. Toyota, Ford, and Volkswagen all market electric vehicles in the United States, although with driving ranges less than half that claimed for the Model 3. However, the Chevrolet Bolt EV is taking on Tesla bumper-to-bumper: the manufacturer is promising a vehicle with about the same range and price as the Model 3, and first deliveries a year ahead of Musk’s schedule.