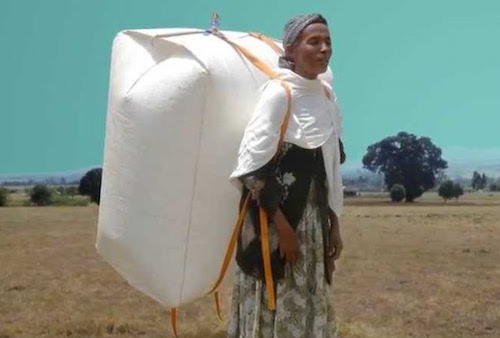 In parts of Africa where adequate sanitation and energy are both scarce, what looks like an oversized blue pillow is solving both problems at once, allowing micro-entrepreneurs to create new businesses turning organic scraps into energy-rich biogas, distributed on customers’ backs in big blue bags.

The basics of the system are simple. The biggest outlay is for “a five-metre long plastic tank—the digester—that takes anything from waste food to goat droppings or those of a larger human form,” Inter Press news agency reports. Customers fill their inflatable blue “(B)packs” with gas from a tube drawing it off the digester, and carry it home to fuel their biogas cooking stove.

The social enterprise company promoting the system is the brainchild of 34-year old German Katrin Puetz, who saw the potential of mobile biogas technology in Africa as a clean, cheap alternative to cooking on smoky, polluting fires. Puetz has turned down offers of charity grants to build up the business, preferring to pursue a self-sustaining expansion through local franchises.

His colleague, Ethiopian franchisee Wubshet Yilak, takes pride in the locally-originated product. “Now we have established local manufacturing of all the mobile biogas equipment here in Ethiopia,” he said. “This is technology designed in Germany, made in Ethiopia.”

The no-frills system is improving air quality and energy security in gas-equipped homes, while reducing organic waste. But that’s not why it’s catching on, Puetz thinks. “Logically, no one who is struggling to survive is interested in saving the environment,” she says. “People will embrace technology if it is cheaper or makes money for them.”